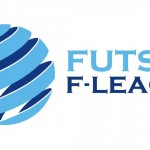 Football NSW wishes to announce that the PUMA F-League Competition will not be delivered by the governing body of the state for the 2017 season.

Football NSW conducted an application process in preparation for the 2017 competition and unfortunately, through this process, did not receive the required number of applications to deliver a viable competition consistent with the standards set in previous seasons

During the application process, Football NSW received feedback that the timing of the season is a challenge given the various football commitments taking place during this period and this may have been a determining factor in PUMA F-League Clubs electing not to apply for the 2017 season.

Football NSW will continue to engage with the Futsal community and fellow member federations in relation to the ongoing development of Futsal and specifically any demand for a viable National Futsal Competition in future seasons.

Football NSW greatly appreciates the assistance and support of the PUMA F-League Clubs and Officials since the Competition’s inception and is hopeful that the organisation can contribute to a National Futsal Competition in future seasons. 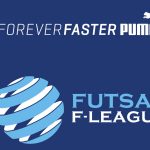 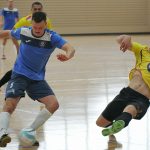 The 2016 Men’s PUMA F-League closed up after Inner West brought down Dural 3-2 before Warriors won both games in Queensland, East Coast winning both ACT runs, while the local derbies fell to North Canberra 3-1 over Boomerangs and Galaxy FC 3-2 against South Brisbane.

The leaderboard has Vic Vipers (27 points) in prime position being chased by Dural (25), East Coast (22) and Inner West (19), with Galaxy (17) not quite out of the playoff equation. 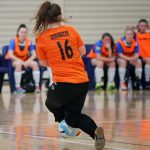 The Queensland threat stayed top of an exciting 2016 Women’s PUMA F-League as Galaxy versus South Brisbane finished 4-4, Dural did it tough north with a brave 3-3 draw against Galaxy before falling 1-3 to South Brisbane, the ACT-derby also finishing deadlocked 2-2, while East Coast fell out of the playoff picture following a 6-2 defeat of Boomerangs and 3-5 loss to North Canberra.

The ladder shows South Brisbane (26) ahead of Galaxy (21), Dural (18) and Boomerangs (17), with a lurking Vics (12) having played three less games than fourth-placed Boomerangs and one less than Warriors who they meet in a fortnight’s time in Victoria. 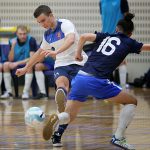 The Vics’ 27 competition points (having played a couple of extra matches) heads Dural (19), East Coast (16), Galaxy (14) and Inner West (13) in what looks likely to be a gripping battle for the top four places. 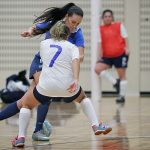 The 2016 Women’s PUMA F-League season took a remarkable twist with Queensland sides Galaxy and South Brisbane racing to the top of the table, as Vic Vipers drew both their ACT games, East Coast lost both their Queensland games and Boomerangs beat North Canberra in the local derby.

And just a cheeky throwback, it can’t go unmentioned that Horsey’s five-goal haul against Bayside Pirates a fortnight ago is the second-highest individual F-League tally (Dural’s Sarah Yatim scored six against Capital FC last year and Pirates weapon Steph Tanti bagged five against Vipers while playing for Melbourne Heart in 2013). 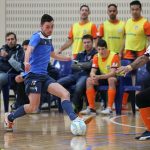 The 2016 Men’s PUMA F-League ignited in intrigue over the weekend as Vic Vipers stunned the Warriors at Dural and Heat at Valentine’s, while Inner West beat Vipers and Galaxy won two in the ACT to set up a tight points table.

And with news the postponed Dural versus South Brisbane fixture would be registered as a 0-0 draw, the Vics leapfrogged them onto 21 points to lead Warriors (19), Inner West (13) and East Coast (12), with Galaxy (10) and South Brisbane (7) still in the playoff picture. 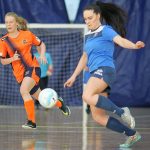 You couldn’t ask for a better 2016 Women’s PUMA F-League campaign with Queensland sides Galaxy and South Brisbane cleaning up in the ACT with four wins from four games, while Vic Vipers split their NSW road trip to set up a points ladder traffic jam.

Dural have a slender one point lead over the northerners (but have played one more game) and their 17 competition points is under siege from Galaxy (16), South Brisbane (16), Boomerangs (12) and the Vics (10), with 2015 premiers East Coast (8) also lurking.

And what more can be said as to how evenly-matched the Women’s F-League has evolved. Over four hot winters a whopping 57% of 167 matches have been decided by two goals or less (a quarter have been one-goal contests). 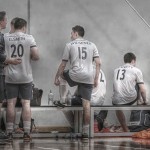 Each team will play four matches during this period – all at home – and will be looking for positive results. For the women’s team, this means consolidating their position at the top of the table, and for the men, an opportunity to bag some much-needed wins.

The Boomerangs F-League Women’s team take on South Brisbane on July 2 (4.00pm), and Galaxy FC July 3 (8.00am), before facing off in a local derby with Untouchables on Friday night July 8 (8.15pm) and then taking on Vic Vipers at midday on Saturday July 9.

The Queensland teams will both be travelling to Canberra after last weekend each splitting their Victorian trip (to Bayside Pirates and Vic Vipers). South Brisbane, an historically strong women’s team, is currently sitting in third position on the ladder with ten competition points from their three wins, one draw and one loss so far this season (to Vic Vipers). Women’s F-League debutants, Galaxy FC, are in fourth place, behind their sunshine state compatriots on goal difference alone. Galaxy have delivered some perplexing results this season with a win over the table-topping Dural Warriors and last weekend, going down to bottom-of-the-table Bayside Pirates. The Boomerangs women currently sit in second place (12 points) behind Dural Warriors on four wins and two losses (both losses to Dural Warriors).

The following weekend sees the ladies in what will be a hard-fought local derby against NC Untouchables. The Untouchable women have started the season slowly, but have more recently been showing some better form, notching a win and a draw in recent weeks. This Friday night game will be followed on the Saturday morning by another tough match against the Vic Vipers – a team that the Boomers ladies fought out a tough battle with a few weeks ago – taking out the match by the narrowest of margins 4-3 at the Victoria Futsal Centre.

There are no more easy matches for the Boomerangs women in the final eight matches of the season – and with half of these being played over the upcoming week, a return of three or four wins is needed to keep sight of the top of the table. 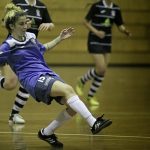 The 2016 Women’s PUMA F-League spun on a dial after Galaxy FC raided NSW with a stunning 4-1 triumph over defending champions Dural and 3-3 draw with defending premiers East Coast, while North Canberra got on the board with a maiden 4-2 win against Bayside Pirates, who earlier fell to an on-song Boomerangs 7-2.

The results have Warriors and Boomerangs level on points (12) ahead of Heat (8), Galaxy (7), South Brisbane (6) and Vipers (4) – with sides from all four states and territory in the running for a top-four national position.

Boomerangs played a smart game to fend off a spirited Bayside Pirates 7-2 at Tuggeranong Indoor Sports Centre on Saturday evening and remain in contention for this year’s title.

After an evenly-matched first half, the home team overpowered the visitors in the second term to seal their second victory over the Pirates this season.

Both teams took time to settle into their routine in a well-balanced opening period, but the Victorian debutants looked composed and threatening in the first stanza of play, despite some strong Boomerangs offence.

The Pirates opened the scoring in the seventh minute with a nicely-finished Steph Tanti goal that only seemed to spur Boomerangs into action as they responded soon after with a Natalie De Marco strike.

The home side claimed the lead minutes later when Alex Martens punished poor ball security by the Pirates in their back court, clinically beating the final defender and Pirates custodian Madeleine Nobbs for Boomerangs to lead a tight game 2-1 at the break and both sides in with a real chance to take control.

The Territorians appeared to realise this and came out of the sheds on fire led by Olivia Gurney who netted just 18 seconds after the restart and smashed a second into the back of the net moments later, De Marco adding another within a minute to set up a commanding 5-1 cushion with 15 minutes remaining in the match.

The Pirates worked hard to keep themselves in it and almost immediately forced a Boomerangs own goal, putting pressure back on to the hosts; but they couldn’t find a way to penetrate a swarming Boomerangs defence with the home team’s 17-year-old debutant keeper Eleni Haridemos also making some crucial saves.

As the clock wound down to the inevitable conclusion Boomerangs scored two more goals, Kate Deakin and Hayley McLachlan both scoring their maiden F-League goals and adding further pain to the Pirates first trip to the national capital.