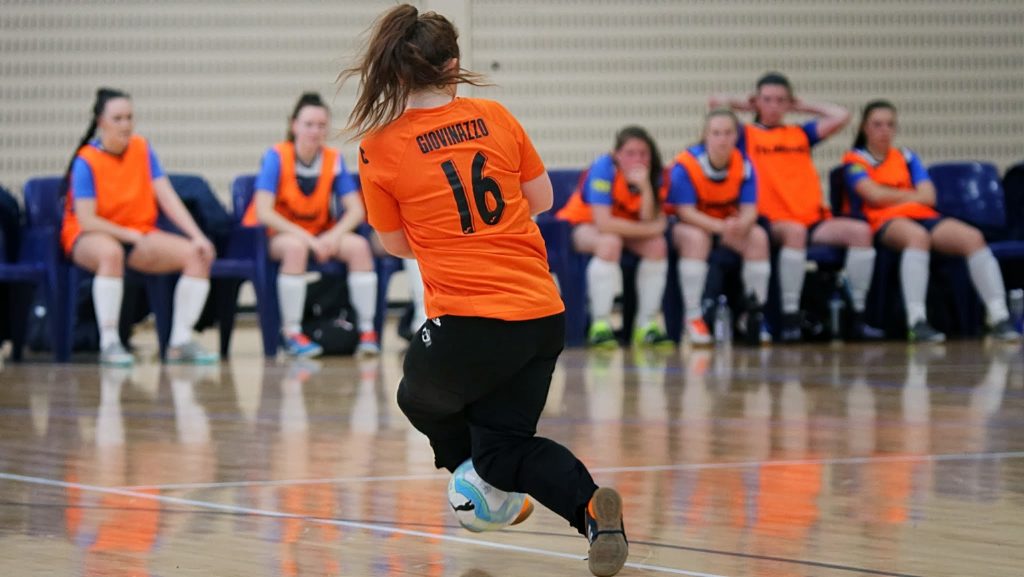 The Queensland threat stayed top of an exciting 2016 Women’s PUMA F-League as Galaxy versus South Brisbane finished 4-4, Dural did it tough north with a brave 3-3 draw against Galaxy before falling 1-3 to South Brisbane, the ACT-derby also finishing deadlocked 2-2, while East Coast fell out of the playoff picture following a 6-2 defeat of Boomerangs and 3-5 loss to North Canberra.

The ladder shows South Brisbane (26) ahead of Galaxy (21), Dural (18) and Boomerangs (17), with a lurking Vics (12) having played three less games than fourth-placed Boomerangs and one less than Warriors who they meet in a fortnight’s time in Victoria.

North Canberra Untouchables rose to the occasion with an excellent 2-2 draw versus cross-town rivals Boomerangs FS at the AIS Training Halls on Friday night.

Fourth-placed Boomerangs were looking to claim some much-needed points to stay in the top-four race against a Untouchables side picking up their season and looking dangerous against every team they face; they were also keen for a local victory having gone down in a close encounter (1-3) in the first Territory showdown a fortnight ago.

After a great deal of possession and chances for North Canberra it was Boomerangs who struck first blood through captain Michaela Day as she slipped her way through the defence and calmly slotted away the opening goal.

It was the wake up call Untouchables needed as they fired one back several minutes later through an Alice Churchill finish to level the match at 1-1, and with time winding down to halftime pocket-rocket Maddy Whittall also struck to take North Canberra into the sheds with a 2-1 lead.

The second half played out very differently with both teams struggling to find attacking opportunities to break the game open, but with six minutes left skilful Boomerangs player Nat De Marco found herself in space, taking on the Untouchables defence and calmly finishing a very nice shot to tie the game up at 2-2.

Neither side could find that desperate final goal needed to take all three points and the final whistle sounded with the scoreline even.

East Coast rediscovered some form in beating Boomerangs FS 6-2 at the AIS Training Halls on Saturday morning, Heat’s Alexia Guerinoni finishing with a hat-trick and Caitlin Campbell bagging a double.

There was no Saturday morning slow-start for these closely-matched rivals as they both came out firing, two goals inside the first two minutes setting the tone for an upbeat fast-paced opening to a full day of F-League matches being held at Canberra’s AIS Training Halls.

Boomerangs captain Day slammed the first into the back of the net with an immediate East Coast response through Caitlin Campbell before the game settled, both teams displaying patience in their build-up play and solidity in their defensive efforts.

Two minutes to halftime the visitors’ Alexia Guerinoni finished off a nice offence slotting past Boomerangs keeper Jess Giovinazzo to give Heat a slender 2-1 lead at the changeover.

East Coast came out of the break with more intent and soon after Guerinoni grabbed her second to double the Heat advantage before the match entered a period of momentum swings as both sides positioned themselves for a strong drive through to the closing moments.

The home team grabbed the initiative with Olivia Gurney slotting home with plenty of time remaining to bridge the now single-goal deficit.

Heat had other plans though and responded swiftly to restore their two-goal buffer and break the Boomerangs back, the visitors powering home with a further two goals in the final few minutes – the 6-2 scoreline sweet revenge for East Coast’s 1-2 loss to the Territorians in Sydney.

The 2016 Women’s PUMA F-League moves north this weekend with all games at Eagle Sports Complex; South Brisbane versus Bayside Pirates on Saturday afternoon (3pm) followed by Galaxy FC against Boomerangs FS (4.45pm). On Sunday South Brisbane tackle Boomerangs in the morning (9am) before Galaxy play Pirates near lunchtime (12.30pm)