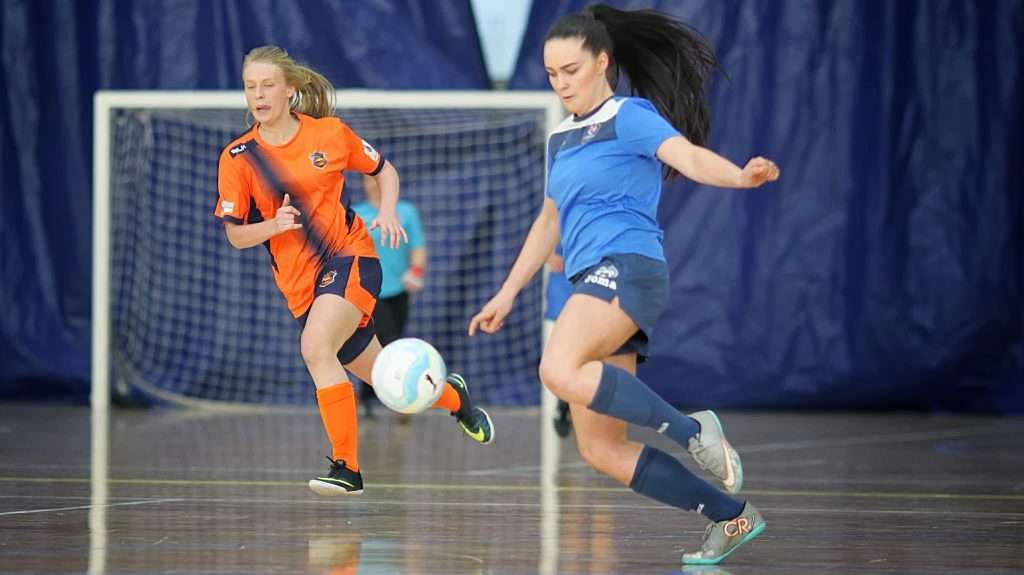 You couldn’t ask for a better 2016 Women’s PUMA F-League campaign with Queensland sides Galaxy and South Brisbane cleaning up in the ACT with four wins from four games, while Vic Vipers split their NSW road trip to set up a points ladder traffic jam.

Dural have a slender one point lead over the northerners (but have played one more game) and their 17 competition points is under siege from Galaxy (16), South Brisbane (16), Boomerangs (12) and the Vics (10), with 2015 premiers East Coast (8) also lurking.

And what more can be said as to how evenly-matched the Women’s F-League has evolved. Over four hot winters a whopping 57% of 167 matches have been decided by two goals or less (a quarter have been one-goal contests).

South Brisbane held off a spirited Boomerangs 7-5 at a refurbished AIS Training Halls on Saturday afternoon.

The visitors capitalised on several defensive lapses from the home side to launch back into premiership contention – the 12-goal melee fifth in terms of highest women’s game scores and eight different scorers one short of the record.

Up until the eighth-minute the match appeared as though it would be a low-scoring tightly-fought arm-wrestle between two determined and skilful teams, but South Brisbane broke the deadlock with a nice play finished off by Sarah Amorim and the floodgates opened as the visitors added another two in quick succession to lead 3-0 in the blink of an eye.

A Boomerangs time-out brought focus back to the players and Kate Deakin’s powerful shot from outside the D dragged back some momentum to the home team but South Brisbane still headed into the sheds leading by 4-2.

Boomerangs came out with a more steely determination in the second half and were rewarded on the half-hour with a goal to their captain Michaela Day halving the deficit, only for South Brisbane to reply almost immediately and retain their two goal margin.

The Queenslanders pounced on a couple more defensive errors to lead 7-3 and although Boomerangs set-piece specialist Olivia Gurney converted two 10m spot kicks to complete her hat-trick it was too little, too late and South Brisbane won 7-5, Nicola Eagle netting three times for the victors.

Galaxy FC stunned Boomerangs FS with a cheeky 3-2 victory at the AIS on Sunday morning.

Galaxy opened the scoring with a sixth-minute goal slammed home on angle by Mariel Hecher but Boomerangs hit straight back through set-piece sniper Olivia Gurney to send the teams into halftime locked at 1-1.

The second half featured end-to-end high-quality intense futsal with great keeping efforts from Jessica Giovinazzo (Boomerangs) and Noran Abaza (Galaxy) keeping the scoreline undisturbed until Gurney made a real offensive difference with yet another spotkick conversion putting the home side a 2-1 ahead midway through the term.

With the game in the balance and pressure and momentum swings frequent it was the Queenslanders who capitalised better when they levelled it up four minutes from the end and then scored again with just a minute left to play to take out a highly-entertaining quality futsal match 3-2.

It was just the fourth time Boomerangs have lost a one-goal result in 15 close-call contests, while Galaxy’s stunning debut season rolls on – their 71% success rate in seven opening runs only bettered by Parramatta Blues (80%). Melbourne Heart (60%) and Sydney Scorpions (57%) were next best.

On Sunday morning North Canberra face Vipers at the AIS Training Halls (9am) and Galaxy meet South Brisbane in the first-ever women’s Queensland derby at Eagle Sports Complex (10am).