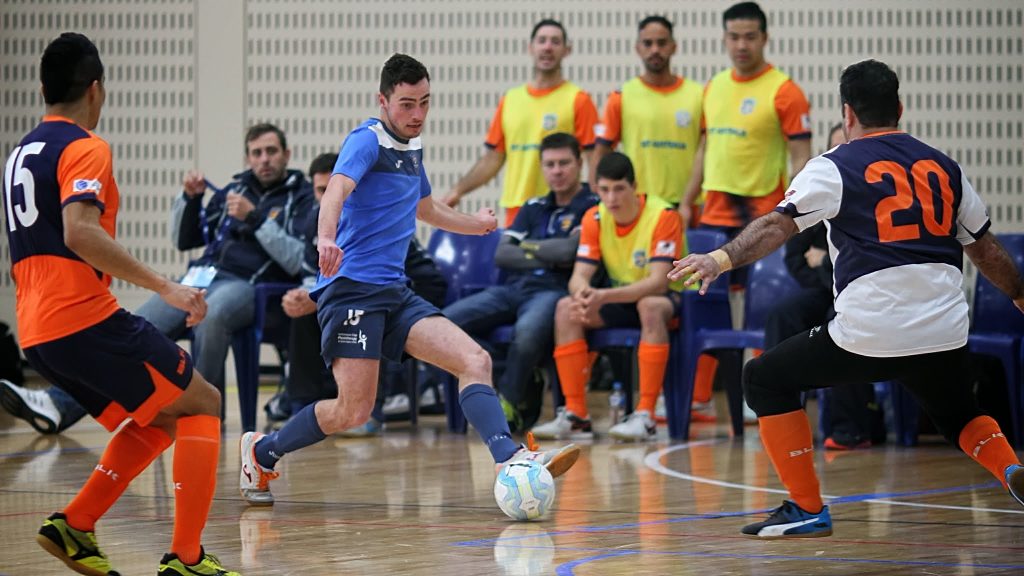 The 2016 Men’s PUMA F-League ignited in intrigue over the weekend as Vic Vipers stunned the Warriors at Dural and Heat at Valentine’s, while Inner West beat Vipers and Galaxy won two in the ACT to set up a tight points table.

And with news the postponed Dural versus South Brisbane fixture would be registered as a 0-0 draw, the Vics leapfrogged them onto 21 points to lead Warriors (19), Inner West (13) and East Coast (12), with Galaxy (10) and South Brisbane (7) still in the playoff picture.

The Queensland visitors were full of running from the get-go, penetrating the home team’s defence with a goal by Adam Stacey in just the third minute, James Egata converting another chance moments later to lift South Brisbane two goals up.

Jake Wilsener halved the deficit for Boomerangs, finishing off a nice passage of passing as the Territorians looked to gain some momentum, but it was Egata who scored for South Brisbane in the death throes of the first half.

The second period was a tightly-contested arm wrestle with little action in the front-third by either team until Glenn Smith executed a lovely goalmouth flick-on in the 31st minute to close the gap to just a single goal.

At 3-2 down and with time ticking away Boomerangs went to a fifth-man powerplay for the last two minutes of the match, but the strategy failed to pay dividends with South Brisbane scoring against the run of play in the final minute to record a 4-2 result.

Galaxy held off Boomerangs 6-4 at Lyneham Hockey Centre on Sunday morning to keep their noses in the post-season window.

The match started with both teams looking controlled and structured and, for the first time this season, Boomerangs scored first to take an early lead.

It didn’t last long however as Galaxy tied it up in the eighth minute, and then took the lead a minute later, extending their advantage to 4-1 before Robbie Cattanach dragged one back for Boomerangs just before halftime.

The visitors come out firing on all cylinders in the second half and their dominance went rewarded with two quickfire goals that built a comfortable 6-2 buffer, but to their credit Boomerangs continued to work hard and saw the fruits of their labour with a maiden F-League goal to 16-year-old Elie Darwich, followed by a cracking Brad Sawyer goal from keeper Nick van Aalst’s long-throw release.

Tuan Cao netted twice for Galaxy, but only one club has unearthed more F-League scorers than the Territorians – Darwich becoming the 36th scorer in Boomerangs colours (in 81 games). Dural has found 34 different scorers over the years (87 games) and Vipers 28 (70 games), but nothing compares to a staggering 55 different players netting for East Coast Heat in just 69 contests.

On Sunday morning North Canberra face Vipers at the AIS Training Halls (10.45am) and Galaxy meet South Brisbane at Eagle Sports Complex (11.45am).