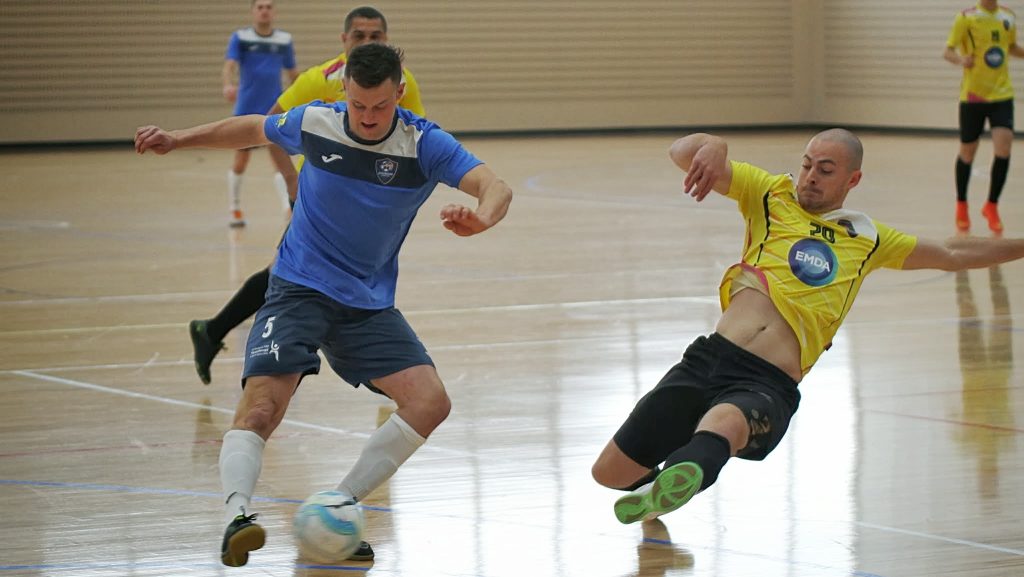 The 2016 Men’s PUMA F-League closed up after Inner West brought down Dural 3-2 before Warriors won both games in Queensland, East Coast winning both ACT runs, while the local derbies fell to North Canberra 3-1 over Boomerangs and Galaxy FC 3-2 against South Brisbane.

The leaderboard has Vic Vipers (27 points) in prime position being chased by Dural (25), East Coast (22) and Inner West (19), with Galaxy (17) not quite out of the playoff equation.

North Canberra Untouchables moved in on neighbours Boomerangs FS with a spirited 3-1 victory at the AIS Training Halls on Friday night.

The ‘battle for the capital’ was always going to be a fierce contest between the respective clubs and with finals hopes out of the picture, it was all for pride and bragging rights.

After Boomerangs claimed the first match of the season 4-2 Untouchables were desperate to peg one back and showed their desperation coming out firing in the opening half.

Both teams showed some penetrating attack, only bettered by some outstanding goalkeeping at both ends to keep the scores level, but with halftime approaching North Canberra’s Jason Farrell teamed up with a calmly-finished Ryan Tredinnick shot for the opening goal and 1-0 lead at oranges.

The second half began in similar fashion as both keepers continued to stop everything coming their way until a ball played into space for an oncoming Michael Sydney run down the line and he rounded the keeper to slot away a second Untouchables goal to break the game open.

North Canberra scored a third moments later to give Tredinnick a brace for the night and provide a much-need buffer as Boomerangs pushed to a fifth-man press and found a consolation goal through Brad Sawyer.

East Coast Heat had to stave off a brave Boomerangs FS 4-3 at the AIS Training Halls on Saturday afternoon.

It was 1-1 midway through the contest and little separated the sides in a tit-for-tat second half, East Coast snaring the points behind a Matt Mazevski brace.

Heat faced a chilly reception in the capital as a feisty young Canberra outfit took the game right to them, perhaps inspired by the ‘Green Machine’ Canberra Raiders NRL-side warming up just a few hundred metres away.

Both sides spent much of the first half using their rotations and performing structured training drills almost to perfection – finishing off in front of goal the only bit not being executed well – and it took until the 16th-minute for the scorer to lift their pen and mark a goal against Heat’s Mazevski, Jake Wilsener replying for the home team not 60 seconds later.

After the break both outfits were clearly under instruction to get more shots off (and on-target) and put the defensive lines under a bit more pressure, Boomerangs breaking the second-stanza deadlock when an on-fire Brad Sawyer slotted past Heat custodian Conor Irwin.

Sawyer again led a strong front court offensive not two minutes later with a powerful shot fended away by Irwin, only for the parry to be mopped up by a prowling Daniel Giovinazzo. The young Boomerangs were growing in confidence on the back of a 3-1 lead with just over a quarter of the match to play.

Jun Arima grabbed one back for the Heat on the half-hour helping the visitors wrestle back the match momentum by halving the deficit, and an infringement inside the defensive D by Boomerangs saw Mazevski net his second and level the scores at 3-3 with less than five minutes to play.

Incredibly, former Boomerang Daniel Fulton – who had been off-target all match – was left isolated on an offensive foray and slammed home Heat’s fourth into the top-corner to give East Coast the lead three minutes from the end.

In a last-ditch, all-out effort Boomerangs ran a fifth-man powerplay with specialist fly ‘keeper Nick van Aalst spent most of the closing minutes shadowing his opposite number Irwin, but Heat’s defence held up under enormous pressure to consolidate a top-three position.