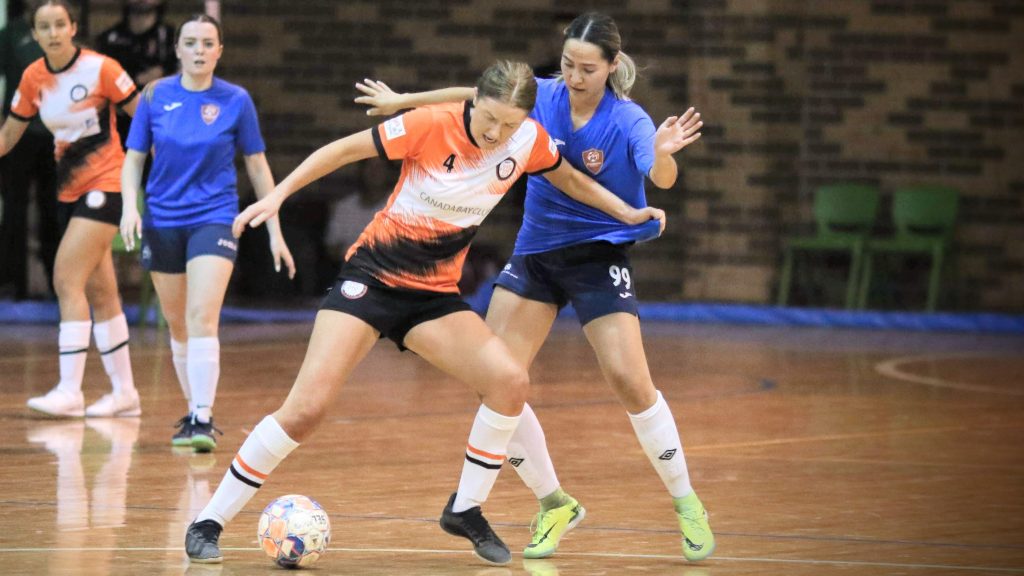 Round 9 of the 2019 Football NSW Premier League 1 competition saw the Boomerangs on the road to Valentine Sports Park to take on the Inner West Magic club. Rounds against the consistently strong Magic sides are always challenging, and this round proved to be no different.

Four exciting, high quality, development squad matches were played to kick off the day, with two for the 9/10 boys on the smaller court and a large court encounter for the 11/12 girls and the 11 boys.

The 13s again put in a workman-like shift against a strong Magic team that is definitely finals bound this season. A second-half goal and an improved defensive effort finished off the match.

The 14 boys had two matches to play against Magic – one from a postponed Round 2 fixture. Unfortunately, the result of both games were not positive and the lads continue to search for ways to better defend while still being more effective at the offensive end to convert their scoring opportunities.

The 15 girls performed admirably against the competition’s front-runners. The second half especially showed promise as they held Magic down to two goals and scored one themselves.

The 16 boys match was cut short by a bad injury to a Magic player just five minutes into the second half. The result though was less than positive for the travelling Boomerangs as they were out-muscled and outplayed by a strong Magic unit.

The 17 girls match was again a terrific high-quality game with only the one goal scored in the match. The teams could not be separated in the first period with both defences holding strong. The Magic girls scored within the first few minutes of the resumption meaning the Boomers girls needed to work hard to grab a share of the competition points, including playing the final six minutes as a fifth-man power play. The home team though, held firm to take the match by a single goal.

The youth men again struggled to get a win out of this match, but they did work hard and at times looked good. A lack of bench depth hurt the lads as they tired in the second half, hampering any resurgence. Overall, not a bad outing against a top-two team.

The Boomerangs women were at close to full strength and pumped for this outing against one of the competition’s top teams. The match started well with Miki Day converting in the fifth minute after some high court pressure forced a turnover.

The Boomers ladies dominated possession and court position and were rewarded with a terrific second goal struck firmly by Liv Gurney after some great build-up work. A second by Miki Day five minutes before half time saw the home side drop their shoulders.

A fourth soon after the break from Maddie Perceval after a great assist from a Liv Gurney fast break put the match to bed and was topped off by a third to Miki Day halfway through the second period.

The Boomerangs men once again produced a herculean effort against one of the competition’s front runners. Magic, a team chock full of international players, is always a tough opposition. The Boomerangs men – as they have been for most of the season – put in a fantastic defensive effort to hold the Magic to a single goal in the first period – and indeed to take the initial initiative with a goal of their own in the fifth minute of play (to Daniel Giovinazzo) after some great build-up work by Jayde James-Ward.

Magic replied in the final few minutes of the first period through a fast break goal to square the match back up.

Magic played periods of the start of the second period with fifth-man powerplay resulting in a score some seven minutes in to take a 2-1 lead. However, as they continued with an unattended goal, a steal high up the court from Jayde James-Ward, allowed him to calmly slot home from 30 metres tying the match back up again.

A third goal to Magic with eight minutes to play meant the fifth-man powerplay now became the means by which the Boomerangs would try and score. But alas, things did not go to plan and three goals were conceded during that period to blow the scoreline out to one which did not reflect the closeness of the match.

NEXT WEEK
Next week the club is at home – playing at the alternate home venue, Q-One Sports in Queanbeyan, – against the Eastern Suburbs Hakoah Club.