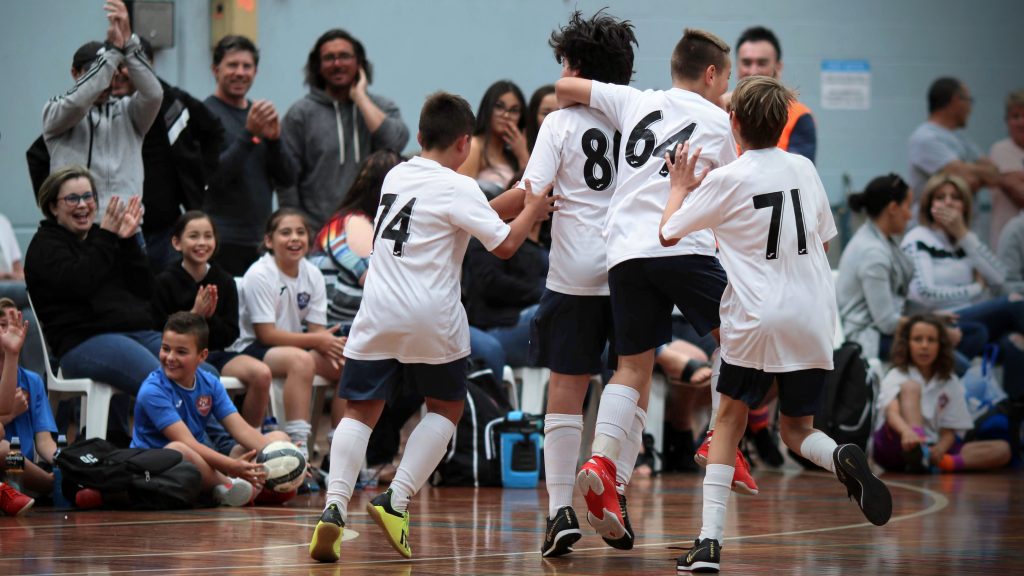 Round 8 of the 2019 Football NSW Premier League 1 competition saw the Boomerangs on the road to Campbelltown to take on the Campbelltown City Quake club. It has been a long time between visits for the Boomerangs at this Minto venue due to not playing in the same grade as the Quake for five or so years.

Three development squad matches were played, again providing the youngest of the Boomers with the opportunity to play against the best junior futsal players from Sydney. The matches against the Quake youngsters did not disappoint.

The 12 boys registered their first win of the season, defeating a team that has also lurked at the bottom end of the competition ladder.

The boys, sensing an opportunity to pick up competition points, lifted their work rate in this match and put in a whole-hearted display to ensure they registered this victory.

With the first win now ticked off for the season, the boys can work on adding to this tally in the remaining weeks of the season.

The 13s were again on the wrong end of a big defeat but put up a really good performance in the first half to show that they are certainly improving. Hopefully, this development will continue for the remainder of the season and help build the girls for the following season in 2020.

The 14 boys, like the 13s girls, managed to put in a good half of futsal, after letting the game get taken away from them in the first period. Some sloppy defensive work allowed the home side to score at will in the first 20 minutes, and it was always going to be too big of a task to come back from the poor start.

The 15 girls showed in this match just how far they have come this season. It was a strong performance across the court for the full 40 minutes – something the 13s and 14s couldn’t manage. The only gap in their arsenal remains the ability to score freely. Hopefully, the remaining matches of the season will help them build on this facet of the game.

The 16 boys were up against a top-two team in Quake, and against that yardstick, they could be happy with their performance. However, there were plenty of opportunities where the defensive lapses allowed Quake easy goals, and chances in the front-court weren’t converted effectively. The lads will be disappointed with this outcome – especially the second half.

The 17 girls, with this draw to second place Quake, have slipped out of the top four. These games are won, drawn and lost with the narrowest of margins, so even though the travelling Boomers were up courtesy of two early goals from Alex McKenzie, it was the concession of two goals – just before and just after the half time break – that ensured the points were split. If the 17s want to play finals futsal, they’ll need to be more ruthless in matches such as these and look to step up their defence in the first and final five-minute periods.

The youth men‘s match had one of the most unusual starts seen for a while from a Boomerangs team. Four of the five regular starters had transport issues which meant the two and a half hour trip ended up taking longer than anticipated. They made it to the stadium halfway through the first half.

The improvised starting five did well though, against a team that is also having a tough season. With Cale Brown standing in goals, the match remained goalless during the first ten minutes of play. Once the full playing roster arrived, they scored first in the match but conceded twice before the half time whistle.

The second half saw a much more settled home side work harder to score regularly and hold out the visitor’s offence. A disappointing result and one that may have been different given a full complement of players from the start.

Despite again being short a few regular players, the Boomers women were confident of a good showing against premiership aspirants Quake.

An early goal by Miki Day set the tone for a first period of play that saw the travelling Boomers dominate, but not able to convert that to increase the lead. Indeed, Quake slotted home their first halfway through the period to see it all square at the break.

The home team gradually started to assert some ascendancy during the second half, with a number of missed scoring opportunities the highlight for the Boomerangs. Two more goals to the home team helped them lock in their second spot on the competition ladder while making it just that bit harder for the Boomers women to make the final four.

The Boomerangs men were looking forward to this match against a team they had defeated earlier in the season (in Round 1). Quake were also hopeful that their ordinary season could be turned around with a good showing against the Boomers – a team sitting just above them on the ladder.

The Boomerangs men’s defence stood out during this scrappy affair as they held out the home team until the 39th minute of the match.

Ben Basser opened the scoring in the match (17′) when he pounced on a backcourt turnover by Quake. Elie Darwich slotted home (25′) from a narrow-angle, beating the keeper at the near post, to double the lead in the final minute of the first half.

The second half saw much of the same with defences holding firm for the most, punctuated by a Mikey Rinaudo ‘special’ assisted by a Nick van Aalst quick release from the defensive ‘D’. Quake grabbed their only goal a few minutes later and pressed – ineffectively – with a fifth-man power play for most of the final ten minutes of the match.

NEXT WEEK
Next week the club is on the road again to take on Club Championship aspirants, Inner West Magic, at Valentine Park.