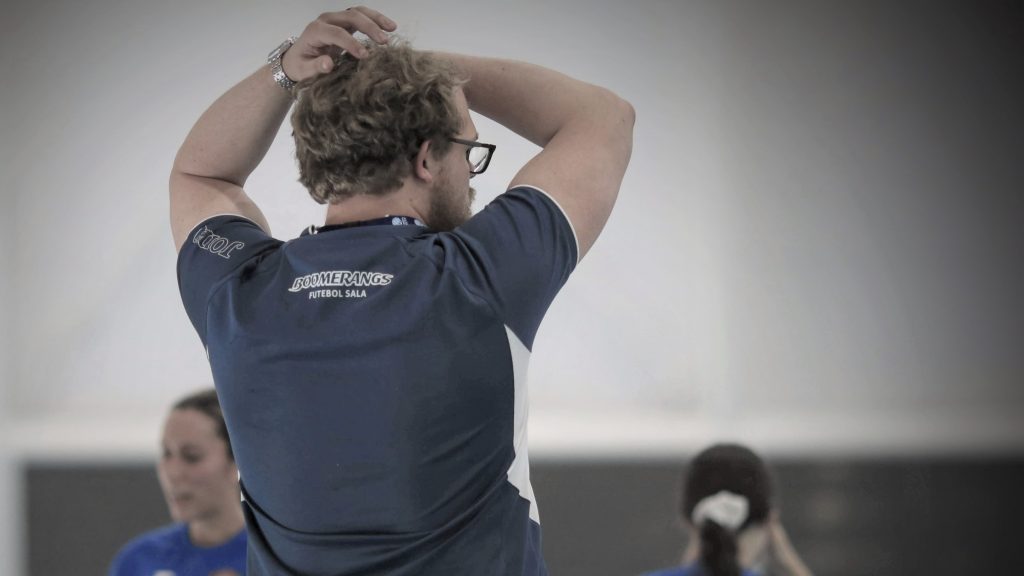 Round 10 of the 2019 Football NSW Premier League 1 competition saw the Boomerangs at home – but at a different venue. With the AIS unavailable, this round was played at Q-One Indoor Sports Centre in Queanbeyan, a venue the club had first used last season.

Two development squad matches were played against Hakoah opposition, with the visitors bringing an 11 boys and an 11/12 girls team. The 9/10 boys played a scratch match against themselves.

The 12 boys were keen to perform well against a Hakoah unit that has not lost a match all season (8 wins/1 draw). The boys lived up to their promise and played solidly against this top opposition. Down by two at the break gave the boys hope that they could deliver a massive upset, but unfortunately the visitors had enough to take the match comfortably, if not convincingly, 4-1.

The 13 girls were looking forward to this match against a team that had won just one match so far this season (v Boomers in R3). Unfortunately, things did not ‘click’ for the girls and the visitors had the best of the match to take it out comfortably. One consolation was a great goal scored by Tiarna Ruberto for the Boomers 13s – her first at this level.

The 14 boys played probably their best match of the season against a top-four Hakoah side. The boys had the match in their hands for the taking at 2-0, but the pressure put on by the visitors in the final ten minutes could not be held out and Hakoah scored two second-half goals to scramble a draw from the match.

The 15 girls also fancied their chances against a Hakoah team that has also struggled to string together wins through the season. Unfortunately, the concession of two early goals (5th and 7th minutes), set the tone for the match with the Boomers girls needing to chase a win for the majority of the match. In the end, it was a bit much for them as Hakoah slotted home their third halfway through the second half to effectively seal the match.

The 16 boys again performed well against another top four Hakoah team, but made their job all that harder by conceding early, and again within the final minute of the first period of play. They brought life back into the contest by scoring first in the second half and were pushing for the equaliser – unsuccessfully – for most of the second period. Hakoah sealed the match with two goals themselves in the final five minutes of time.

The battle for finals spots in the 17 girls age group is heating up and almost all teams in the league are still in with a shot. With this in mind, the Boomers 17s knew that a win against Hakoah was important to their finals aspirations. They started the match with a fifth-man powerplay to put off the opposition, and it worked in that they retained the majority of the possession and court position for the first 20 minutes. Unfortunately, it took just two mistakes for the visitors to score on the counter. The second half was played in a more orthodox manner and resulted in no additional goals being scored by either side. A disappointing loss, meaning the girls will probably need to win their final four matches to play finals.

The youth men took it right up to their opposition for the first twenty minutes of this match, scoring first to take an early lead, but conceding soon after and relinquish it. All square at the break and it was anyone’s match. However, a series of early mistakes lead to two quick goals by the visitors. The lads got themselves back into the game at 3-3 with twelve minutes to play, but again, some sloppy defending meant more goals conceded and ultimately a definitely winnable match was lost.

The Boomerangs women were missing several of their regular starters, and this impacted how this game played out. The earlier season encounter against Hakoah saw the Boomers women throw away a three-goal lead to split the points with the Hakoah ladies.

This match saw a reinvigorated Hakoah team hit the court harder and faster than the Boomers as they created and converted more scoring opportunities.

A disappointing match for the ladies who were looking for a better performance and outcome for this match given their recent FNSW PL form.

The Boomerangs men were shell shocked with a rocket of a shot from Hakoah’s Dylan Basger just one minute into the match.

For the next 30 minutes, not another goal was scored as the teams traded blows but lifted defensively.

The travelling Hakoah team grabbed a second, six minutes into the second half, and after a period of time without offensive penetration. A third goal with twelve minutes to play forced the Boomers to resort to a fifth-man powerplay in order to increase their chances of scoring.

The home side did score after five minutes of the offensive advantage, off the boot of fly keeper Nick van Aalst. But with seven minutes still to play, Hakoah’s defence tightened as the Boomers plied it with pressure.

Another goal into a weakly defended goal mouth for the visitors with just a few minutes to play resulted in a healthy win to take them to second on the competition ladder – but with a scoreline which did not really reflect the closeness of the game.

A disappointing set of results against a club that the Boomerangs would usually compete more strongly against. Across the nine competitive matches, FIVE of them had the Hakoah teams up 2-0 at the half time break. And FOUR games were lost to the scoreline of 1-4.

NEXT WEEK
Next weekend the club is both on the road, and at home for the season’s gruelling double-header. The away round on Saturday is at the UTS home court in Dee Why, with a Sunday round following at home against Enfield Allstars.