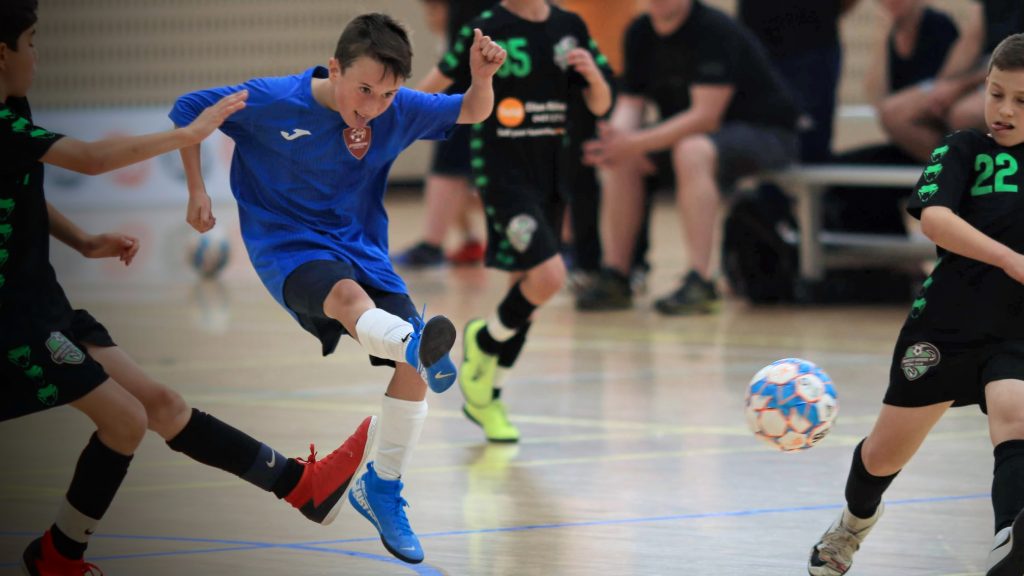 Round 7 of the 2019 Football NSW Premier League 1 competition saw the Boomerangs at home against the only club yet to be played this season – Mascot Vipers. In previous years the Vipers have been a stalwart of the Premier League 1 competition and recently won the club championship. This year, they have strong teams across many age groups, but also a few age groups where there was an opportunity for a result for the Boomerangs teams.

A full set of development squad matches were played, again providing the youngest of the Boomers with the opportunity to play against the best junior futsal players from Sydney.

There were some strong performances across the day, but also some disappointment where opportunities were not fully realised to gain a couple more wins. But there was again strong performances from the 16 boys and 17 girls and both the open men’s and women’s team, with the women coming away with a win against the previously undefeated Vipers.

The 12 boys looked solid in the first half and challenged the opposition across the court. They could have overcome the two-goal deficit with a bit of luck, but alas, the Viper 12s put the foot down in the second period and did not allow the home team any free space to be creative.

The 13s again struggled to compete strongly against this level of competition. There were glimpses of improvement from individual players, but as a team, they still have a bit of a learning curve to work through. A notable mention for Georgia Ritchie in goals, without her strong match performance, the result could have been worse still.

14 boys were right in this match, with all that was lacking was the ability to creating and converting good scoring opportunities. However, against a team that had yet to win a game so far this season, the Boomers could well have been more aggressive, positive and confident to put the travellers under more pressure.

The 15 girls match against a strong Vipers team that had yet to lose a match all season, was always going to be a challenge. However, the girls rose to the occasion, and with a strong focus on defence, did well to keep themselves in the game until the half time break. After the break, the visitors became more productive in front of goal, whilst the Boomers girls lacked authority at their offensive end.

Much like the 14’s, the 16 boys were in a position to grab a much-needed win in this match against a fellow team languishing at the base of the competition ladder.   The lads worked hard throughout, but could not break through the visitor’s defences, whilst conceding just a solitary goal each half.

The 17 girls were switched on for this match and showed the much-needed desire, effort and intent required for a win. They moved the ball crisply, confidently and effectively, not allowing the Vipers much time on the ball at all. Five goals evenly spread throughout the contest whilst keeping a clean sheet defensively, showed what this Boomers team can accomplish – and sets an example for others to follow.

The youth men‘s match was always going to be tough against a team that had lost only one game so far this season and had the best defence in the competition – conceding a miserly seven goals across six matches. However, the Vipers youth have also not been highly productive at the offensive end and has scored only 14 goals season to date.

In this match though, they threw the season form book out the window, and whilst they did concede one, they were able to slot home eight goals against a leaky Boomers defence.

The women‘s match was, without doubt, the most exciting match of the round, and possibly of the season so far. Whilst the 17 girls made easier work of their Viper’s opposition, the Boomers ladies – for the first time with a full roster of players available – were able to steal the match in the dying seconds from the short-handed Vipers.

The match was evenly poised at the break at one goal a piece after the Boomers scored in the seventh minute. Going into the break, they conceded with just three to go in the first half.

The visitors slotted home their second soon after the resumption, but a tireless, never-say-die attitude from the Boomerangs women, aided by an aggressive fifth-man power play, grabbed back the two required goals in the final 90 seconds of the match to inflict the Viper’s first defeat of the season. Check out the video below!

The men’s match again showed that this team can match it against any team in the league (Vipers sit atop the table and remain undefeated). However, there still remains a lack of cut through at the scoring end of the court to top off the tight, solid defensive work.

The first half was an arm wrestle – much like last week’s match, but with increased intensity, with the visitors only able to slot home a goal in the final three minutes as the Boomers tired.

The visitors scored almost immediately in the second half as they hit the court more ready to play than the Boomers men. A third just a few minutes later made it a steep hill to climb for the Boomers to come back, and the fifth-man power play deployed by the home side was ably defended by the visiting Vipers.

The frustrating season continues for the men as they are playing solidly in most facets of the game, but continue to concede at crucial points in matches, and have demonstrated a lack of cut-through to put opposition teams under scoreboard pressure.

NEXT WEEK
To start the second half of the season, next week the club is on the road again to take on Campbelltown Quake at Minto.