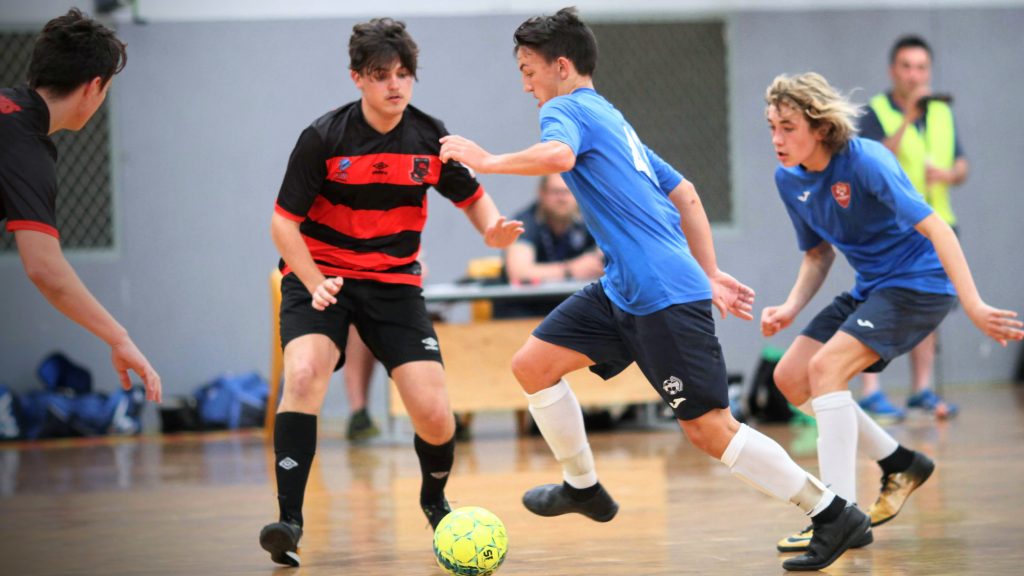 Unfortunately, the home side seemed more determined to take a rare win from the final match of the season and outplayed the Boomers boys, especially in the second half where they extended their halftime lead to take the match 5-2. A end to the season for this bunch of lads with plenty of potential.
Goals to AJ Malauulu, Cassidy Schlessinger
Ladder Position: 8th ( – )

13 GIRLS:
Boomerangs 13 – 3 West City Crusaders (ht 6 – 1)
The 13 girls were prepared to give everything in this match to put themselves in the best position to qualify for finals. And as it was, this outstanding result, and another key result, went the right way so that the youngest competitive Boomers girls managed to jag the fourth finals spot.

Whilst the first half showed the determination and effort by the girls, the second showed how flexible they could be, operating for most of the 20 with a fifth-man power play. This experience will be highly valuable should they need to resort to it in the upcoming finals.

A bucket load of goals, highlighted by the five scored by Maia Cameron, was a terrific way to cap off the regular season and head into the finals with a deal of momentum.
Goals to Maia Cameron (5), Izzy Listar (2), Reilly Yuen (2), Tia Burridge, Kiara Meza (2), Maddie Steinacker
Ladder Position: 4th ( +1 )

14 BOYS:
Boomerangs 8 – 1 West City Crusaders (ht 2 – 0)
The 14 boys, being well out of contention for the top four, still had a major motivator for this match – to help the club accrue club championship points. And the boys didn’t dissapoint.

The lads were solid in the first half and scored two whilst importantly focusing on their defensive effort.

The second half saw them full of confidence and running as they piled on another six goals to comfortably take out the match, with three goals to Tom Barbatano, the highlight.

This win by the 14s was made more satisfying as we learnt that Sydney City Eagles had defeated the Raiders in the 14 boys, giving the Boomers a temporary lead in the Club Championship race.
Goal to Tom Barbatano (3), Noah Fior (2), Noah Steinacker (2), Nabil Djomani-Ousmane
Ladder Position: 7th ( – )

15 GIRLS:
Boomerangs 10 – 1 West City Crusaders (ht 4 – 1)
The 15 girls were at their devastatingly best in this match. A solid and disciplined first half saw them comfortably up 4-1 at the break.

The girls really got themselves into gear in the second half though, as they piled on a further six goals to seal another precious three competition points.

With this win, the girls gave themselves the best shot at grabbing the premiership, however, Raiders Futsal comfortably defeated the Sydney City Eagles to maintain their position at the top of the table.
Goals to Elke Aitolu (2), Amelia Brown (2), Sienna Davis (2), Teah Hayes (2), Stefi Lejins, Meg Roden
Ladder Position: 2nd ( – )

16 BOYS:
Boomerangs 5 – 2 West City Crusaders (ht 4 – 0)
The 16 boys are on fire at the moment and full of confidence and running. And whilst the lads couldn’t improve on their second place on the 16 boys ladder, they knew the value of the three points to the club championship.

There was also a chance that Sydney City could have defeated Raiders Futsal in this age group with the teams evenly matched and both teams looking to seal a finals spot. As it was a win to Raiders Futsal meant that a win by the Boomers 16s was necessary to maintain the slender single point lead that the Boomers club now had.

The Boomers dominated from the opening salvos of the match and combined their offensive weaponry with a determined defence allowing them to take a 4-0 lead into the break.

The second half saw a resurgence from the home side – that also had a chance of grabbing a finals spot with a win, but the Boomers boys put their foot down to finish out the game strongly.
Goal to Stefan Vucic (3), Leon Michl,
Ladder Position: 2nd ( – )

18 WOMEN:
Boomerangs 9 – 0 West City Crusaders (ht 7 – 0)
The 18 women’s – like the 16 boys – couldn’t improve their standing on the competition ladder, nor could they drop further down than third had they lost the match. The motivation to win was therefore to contribute club championship points and to continue their fine form going into finals.

The home side had little to play for, not being in contention for finals and languishing on the bottom of the ladder. The ladies started the game with a bang and kept the momentum up during the first , sealing the victory before the halftime whistle.

YOUTH MEN:
Boomerangs 7 – 5 West City Crusaders ( 1 – 2)
The youth men’s match was one of the most thrilling of the season and showed how much club spirit and determination these lads have. The Boomers youth needed the win to seal the Premiership and of course, it was conveyed to them the value of the three competition points given that Raiders Futsal had only lost the solitary match to date against Sydney City Eagles.

The Crusaders had little to play for bar pride, but play they did – offering up one of the sternest challenges the youth men have had all season. The home team worked hard to take a single goal lead into the break, and the travelling Boomers youth knew they had to lift significantly to take the points in the second half.

The halftime coach’s talk focussed on the need to cement the Premiership by winning and to ensure that they would not be defeated by a team that had little to play for. The motivation worked and the lads came out firing in the second period. But that didn’t stop the home team put in a tremendous effort right across the court. Goals were exchanged at lightning speed – and the lead changed several times – but it was that drive and momentum in the final five minutes that brought the win to the Boomerangs youth.

They finish as Premiers and as hot favourites in the finals series on January 19/20.
Goals to Jayde James-Ward (2), Leon Michl (2), Nic Felizzi, Will Manalo,
Ladder Position: 1st ( – )

OPEN WOMEN:
Boomerangs 5 – 0 West City Crusaders (ht 1 – 0)
The Boomerangs women knew what they needed to do – to secure the three competition points. The focus on defence ensured they kept a clean sheet in the first half whilst being able to score one themselves.

The second half saw the defensive intensity remain, and with the frustration taking its toll on the opposition, they were able to counter effectively to score another four unanswered in the second period.

Mission accomplished – securing the three competition points for the club, and maintaining their stellar run in to finals.  The ladies have lost only once this season – the Round 2 match away against South Coast Taipans. Twelve consecutive wins since has locked them in as Premiers and has set them as favourites to take out the Grand Final in January.
Goals to Grace Basser-Silk (2), Georgie Kent, Alex Martens, Alex McKenzie
Ladder Position: 1st ( – )

OPEN MEN:
Boomerangs 4 – 4 West City Crusaders (ht 1 – 2)
With news coming from the Raiders Futsal v Sydney City Eagles matches that the Raiders had dropped only the 14 boys and won the remainder up to and including the women, it was necessary to win the men’s match to secure the club championship.

Anything less than a win would mean relying on Eagles to defeat Raiders in the men’s match. On form across the season, the Eagles have been dominant and secured the Premiership several weeks out, but their recent form at the back end of the season had been patchy, and they were no certainty to defeat Raiders Futsal – who themselves were in a three-way battle for the final top-four spot.

When these two teams met in Round 7, the result was a 2-2 draw at the AIS. The lads knew what they needed to do, but they couldn’t shake the persistent Crusaders. The home team worked up a single goal advantage at the break, and it seemed every time the Boomers men gained some momentum, or snuck home a goal, the Crusaders would come right back. A terrific effort at the offensive end by Mikey Rinaudo saw them convert several of their opportunities, but the Crusaders were just as determined to grab the win.

It was a tense and expectant ten-fifteen minutes after the match until the result of the Eagles/Raiders match was known, and the mood change from agony (to be so close but miss out on the Club Championship by a single point) and ecstasy – winning the Club Championship by two points.
Goals to: Michael Rinaudo (3), Nic Dahl
Ladder Position: 7th ( – )

CLUB CHAMPIONSHIP
After 14 rounds of regular season matches, Boomerangs FS have finished with the most competition points across the seven age groups from 14 boys to open men handing the club the Club Championship for 2018/2019. It was a very close run thing and went down to the very last match of the season, where the men’s draw against the Crusaders would not have been enough if Raiders Futsal had defeated Sydney City Eagles. As it was, with the Eagles winning that match, and the 14 boys – ensured a four-point turn around from round 13 to round 14.

Being Club Champions in the PL2 second tier has traditionally meant that FNSW offers the club admittance to the PL1 competition.

THE FINALS SERIES
This season, for the first time, the finals weekend has been shortened and squeezed into a single weekend. In previous years, finals have involved a top four, with the top two teams receiving a double chance, and played over three weekends. The finals series also includes the 12 boys and 13 girls competitive age groups (even though their points do not contribute to the Club Championship).

The club will have six teams involved in finals, the 13 girls, 15 girls, 18 women and open women (all the female teams), as well as the 16 boys and the youth men. The finals will occur on the weekend of 19/20 January in Sydney.