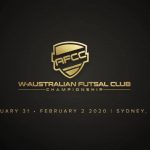 A men’s version of this competition was played in September 2019.

The club assembled a strong young team, with plenty of experience and a desire to do well. The eleven players consisted of six 17-year-olds, an 18 and a 19-year-old and a few in their mid-twenties.

With eight teams participating, the Boomers ladies were drawn in Pool A with Mountain Majik from the FNSW PL competition, as well as South Brisbane and South Perth.

The first up game for the ladies was on Friday afternoon against Mountain Majik – a team they had not been able to defeat in the FNSW PL1 competition just finished, with a loss at home and draw away. A 1-1 draw was probably a decent result as the Majik ladies held the lead for the majority of the contest, but allowed a goal from a corner with just five minutes remaining, resulting in a one-all draw.

The second match, on Saturday morning, had the ladies up against South Brisbane, a team that had competed solidly in the several years of the national F-League when it was operational. In that competition, matches between South Brisbane and the Boomers were always close and competitive affairs.

After losing their first match, South Brisbane realised they needed a result and started the match playing a fifth man powerplay. Unfortunately for them, the Boomerangs ladies handled the switch up well and did not allow the Queenslanders to maintain possession in their frontcourt for sustained periods. This was a close match up until the final ten minutes when the Boomerangs ladies slotted two goals to take the win 3-1.

The ladies went into the third match against an also undefeated South Perth, knowing that a win or a draw was necessary for them to make the semi-final. It was a tight, even contest where both teams were putting in maximum effort. The final result, a 2-2 draw, was reflective of the match and the evenness of the teams.

With a win and two draws, the Boomerangs ladies finished second in Pool A behind South Perth, who finished with two wins and a draw. This meant a semi-final match-up with Inner West Magic, a team that the ladies know a fair bit about having competed against them for a few years in the FNSW competitions. The Magic were on a roll, topping their group (on goal difference over EWA Cockburn) having not lost a game in any competition since 16 November when they were soundly defeated (5-0) by the Boomerangs ladies at the very same venue.

The Boomers ladies went into the match confident, knowing they could match it with the strongest team in what is considered the strongest league in the country – the FNSW PL1. Unfortunately, the fourth game in three days in 40 degree plus days took its toll and whilst they played strongly and competed for the entire match, they just could not penetrate the Magic’s solid defence. And it only took a small sniff of an opportunity, as the Boomers defences waned – for the Magic’s sharp-shooters to slot home the goals they needed to win the encounter and lock themselves a Grand Final spot.

Inner West Magic did indeed meet their own lofty expectations as they went on to defeat Perth’s EWA Cockburn in a penalty shootout, just an hour after the semi-final was played. A tremendous effort by those players.

So a semi-final exit was a decent result but was a step or two short of the ultimate goal. All the ladies played brilliantly across their four matches and were a credit to the club. The team was also well-coached by Kristian Collins and Nick van Aalst.

The aim of course, is to come back next year and to improve on that result.

And as a bonus, Michaela Thornton (Day) was selected in the team of the tournament, reflecting her own strong performance both as a player and team captain.

Photos of the matches can be found at https://photos.app.goo.gl/q6c72ThMeiXB4uVU9 and videos of all the matches at the AFCC Facebook page at https://www.facebook.com/australianfutsalclubchampionship/