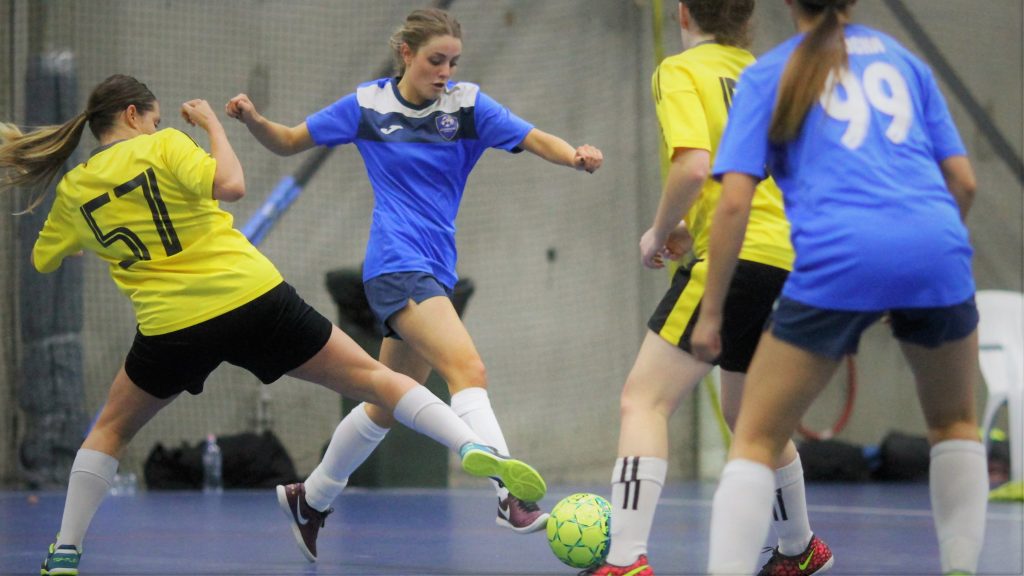 Round five of the 17/18 FNSW Premier League 2 competition saw the Boomerangs club travel again up the highway to Sydney’s western suburbs, with a competitive round of matches against Raiders Futsal at Wetherill Park. Raiders have regularly been a top performing team in PL2 and are generally in the mix for promotion to PL1 at the end of every season.

Development Squad Matches
Raiders could not offer games against development squads, so matches were organised against Mountain Majik at Blacktown. Majik have a comprehensive junior development program which sees them as one of the top clubs in NSW. Games were arranged for each of the development squads including an early match for 11 boys, a mid-morning match for the 11/12 girls and two afternoon matches for the 10 boys. The young ‘baby boomer’ squads continue to develop and it is matches such as these – against well coached and drilled Sydney teams – that will provide them with the tough competition to allow them to continue growing as players and as teams. We thank the Majik club (a PL1 club) for inviting us to play.

12 Boys: Boomerangs 2 – 4 Raiders (ht 1-1)
The 12 boys started their match against a strong Raiders team well, and matched it with them comfortably for the first twenty, seeing an even match all tied up at 1-1 at the break. The second half though saw the Raiders youngsters step up to another gear and score goals seemingly with ease. The young Boomers could not match the speed and physicality in the second period and could not bring home the three competition points. This was a disappointing result given that the Raiders 12s had only won one match prior to this.
Ladder Position: 4th

13 Girls: Boomerangs 0 – 1 Raiders (ht 0-0)
The 13 girls were involved in an entertaining and engrossing encounter against the Raiders across the full forty minutes. The inability though to score goals at the end of offensive forays hampered the girls as they conceded only one in the second half, but could not manufacture a way to get the goal in the back of the net at the offensive end. Another disappointing result against a team well matched across the court with the Boomers 13 girls.
Ladder Position: 5th

14 Boys: Boomerangs 2 – 4 Raiders (ht 0-1)
Like the 12 boys, the Raiders 14s had only one a single win from their four to date in season 17/18 prior to this match. However, they pulled out a big game for the match against a Boomerangs team that had lost only a single match prior to this Round. The first half was evenly fought with the home team managing to take a slender lead into the break. The second half though saw the Raiders lift in effort – which could not be matched by the travelling Boomers. This is two losses in a row for the 14s – disappointing after such a great start to the season with three consecutive wins.
Goal to Noah Dowling, Ordhan Traynor
Ladder Position: 3rd

15 Girls: Boomerangs 2 – 1 Raiders (ht 1-1)
The 15 girls continue to be the form team of both the 15s competition and the Boomerangs list with their unbeaten run extending to five games. This match though, against an also previously unbeaten Raiders opposition, was the toughest of the season so far. Nothing could separate the two teams at the half time break, but it was a tough and determined second half by the Boomers girls that saw them able to convert again in the second stanza whilst defending their goals successfully from the many offensive raids from their opposition. Next week sees the challenge continue for these girls with another match against a strong Hakoah side that have lost but one game this season – by a single goal to Raiders.
Ladder Position: 1st
Goals to Stella De Marco, Lily Martens

16 Boys: Boomerangs 3 – 5 Raiders (ht 0-2)
The 16 boys were more than a match for the 16s Raiders and could have/should have done better, but for their propensity to concede cheap goals early in a half. If the lads can eliminate these defensive lapses they will certainly be more competitive. After their first up win in the previous round, the boys were full of confidence, but need to work first on their defensive end of the court. They can certainly score goals, but only if they stop conceding easy goals will they regularly win more matches.
Ladder Position: 7th
Goal to Leon Michl, Andrew Noack and Olly McCarthy

18 Girls: Boomerangs 3 – 4 Raiders (ht 2-1)
Another top of the table clash saw a cracker of a game at the Futsal Institute in Wetherill Park. The Canberra girls looked comfortable in this fixture, leading throughout the game, including at the break 2-1. The Raiders though, to their credit, never lost their enthusiasm and effort and built up decent momentum going into the latter part of the second period, where they managed to net enough times to run over the top of the cruising Boomers. Another loss that may be rued at season’s end.
Ladder Position: 1st
Goals to Grace Basser-Silk (2), Ellen Brown

Youth Men: Boomerangs 5 – 4 Raiders (ht 3-1)
The Boomerangs youth men’s match was an absolute cracker – as many of them are – and played at a million miles an hour. The travelling Boomers took the initiative early and managed to dominate a first half scoring three goals and conceding only a single. The Raiders lads worked hard in the second period to wrest back some of the momentum and were full of steam scoring enough goals to tie it up at 4-4 with not much time left on the clock. With both teams playing flat out for the win (and not being content with a draw) the last frantic few minutes saw opportunities at both ends of the court, but it was a solo effort by Elie Darwich that got the visitors home in the final thirty seconds of the match. The Boomers support crew went ballistic. A super effort from this now depleted squad, who proved they can still play at a very high level without their National Y-League team mates. They will continue to be a threat in this competition. A great effort also by Johnny O’G netting a hat trick and helping to keep their unbeaten season intact.
Ladder Position: 2nd
Goals to Johnny O’Gorman (3) Elie Darwich and Jayde James-Ward

Open Women: Boomerangs 5 – 0 Raiders (ht 3-0)
The Open age women’s team brought life back to their campaign with this dominant performance over Raiders. After last week’s loss to Phoenix, the ladies were keen to atone, and put in a stellar effort across the entire 40 minutes. Doubles to Corbett and Martens and a goal to Jalocha saw the result never in doubt with contributions from everyone who hit the court. A good result that sees them retain their top four position and well prepares them for their match up with top placed Hakoah next weekend.
Ladder Position: 3rd
Goals to Rachael Corbett (2), Alex Martens (2), Nicole Jalocha

Open Men: Boomerangs 3 – 5 Raiders (ht 2-1)
Clashes between these two teams have, in the past, always been tense and heated affairs, with neither team willing to give an inch, in matches that are always seemingly important to finals participation or indeed Club Championship points. The match got off to a flyer with Jason O’Dwyer spotting a gap in the defence within the first ninety seconds and slotting truly. Raiders though, evened it back up with a powerful drive within but a few minutes. A goal to Wilsener in the dying stages of the first half saw the away team take a narrow lead into the break.

Raiders opened the second half like the Boomers did the first and brought the game back on even terms. A Ben Basser classic halfway through the second period saw the momentum swing again to the Boomerangs. However not a few minutes later the home team found another path to goal as they levelled it up at three apiece. With seven to play, the Raiders grabbed the match momentum to secure the lead 4-3. With three minutes to play, the visitors threw caution to the wind, and playing for the win, went to a fifth man power play (five court players and no goalie). The lads showed terrific patience and a textbook build up in executing their power play, but the Raiders defended solidly, allowing now gaps to open and no viable shots on goal. A final goal to Raiders into an unattended net sealed the match for the home team 5-3.

The Boomers have now relinquished top spot on the ladder and find themselves in a congested pack including Raiders, Phoenix, (all on 12 points), Sydney City Eagles and Hakoah (who they play next week.) A cracking season.
Ladder Position: 3rd
Goals to Jason O’Dwyer, Jake Wilsener and Ben Basser-Silk

A not so positive round of results for this, the fifth round of the 17/18 PL2 season, with only three wins against Raiders Futsal. To vie for promotion to the top league, a minimum of five wins is required, preferably six per round. Next weekend again sees tough competition from the inform and club championship leader, Eastern Suburbs Hakoah. Check out the Club Championship after five weeks into the 17/18 competition.