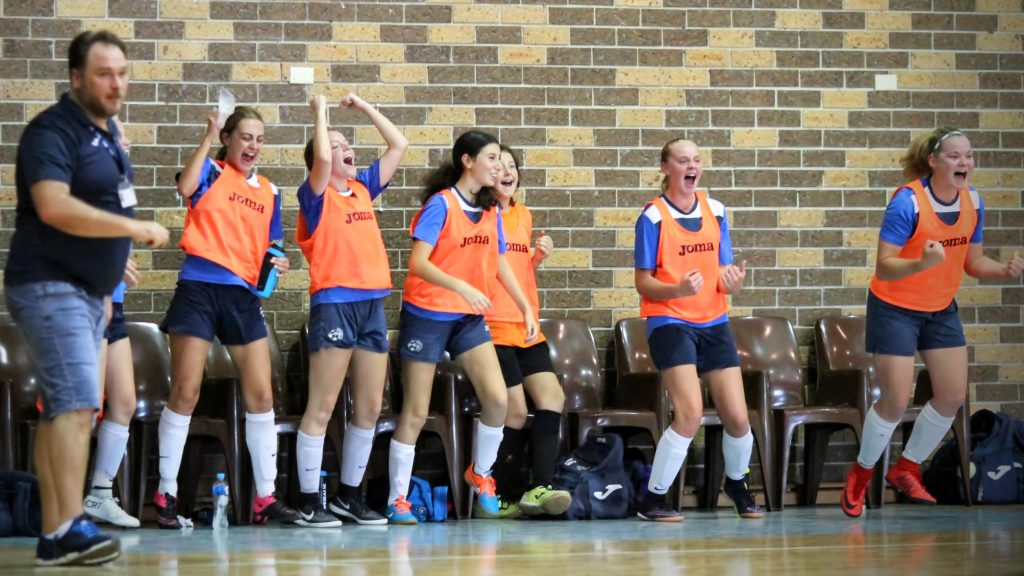 Coach Mark Dowling always has a plan for each match – and for this match, it was no different. The players he has moulded this season have been disciplined and effective at playing their role to ensure the team as a whole achieves its objectives.

The game started in a frantic and tense manner – clearly, players from both sides were well aware of the importance of the match.  It took a while, but the Boomers girls were the first to settle into the match – although the frantic intensity did continue until the halftime break.

Terrific finishing, by cousins Maria Pachi and Stella De Marco, with a goal in each half — of great team goals — exemplified the way the 15s have played this season with great teamwork built on the back of a rock-solid Sally James in goals.

A satisfying match to finish the season – and probably the most deserved Grand Final wins of all nine competitive PL2 age groups given how dominant these girls were all season.
Goals to Maria Pachie, Stella De Marco

18 Girls: Boomerangs 1 – 4 Raiders (ht 1 – 2)
The 18s were also up against a strong Raiders outfit that they had also lost to in the qualifying semi-final. Like the 15s, the girls looked a touch nervous going into the biggest match of the season and it took some time for them to settle down into their usual pattern of play.

And whilst the Boomers girls were the first to score – through Lefty Meuronen in the tenth minute – it always looked like the Raiders had a few goals in them. And they delivered one of these just five minutes later. They grabbed the lead with a goal in the final couple of minutes of the first half, in what would prove to be a decisive period of play.

The second stanza saw the Boomerangs fight hard to get back into the match, but holding the match lead gave the Raiders a deal of confidence, and they played with more certainty and assuredness. The Raiders girls were able to knock home a couple of additional goals in the final six minutes of the second half and to hold their defences firm throughout, whilst the Boomers 18s could not convert their final third opportunities.

A disappointing end to the season for the Boomerangs 18 women, but a season that could be considered successful in many ways, finishing runners-ups up in both the regular season premiership and end of season championship to Raiders. This will give the girls some clear objectives for next season.
Goal to Alicia Meuronen

Youth Men: Boomerangs 3 – 2 Raiders Futsal (ht 0 – 2)
The youth men really had no right to be in this Grand Final. Many times this season they looked down and out, especially towards the back end where they fell from top of the league ladder after Round 7, to fifth after the second last round – only scraping into the finals through a couple of terrific wins and other results going their way.

Whatever their path to the finals, this team is full of skill, confidence, and a lot of damned hard work. The core group of seven players who turned up week in and week out were supplemented by a rotating half dozen more.

After last weekend’s gruelling extra time win over a strong Central Coast outfit in the preliminary final, and the previous week’s  5-1 rout of Sydney City Eagles in the elimination semi-final, not many held hope of these lads getting up again to knock off a tough and disciplined Raiders outfit. No one told the lads that though, and whilst they were not first to score in the match, and indeed went into the half time break two goals down after conceding an early penalty and a second goal (both to the Raider’s exceedingly talented Hassan Jalloh), they were determined to make a good account of themselves in the final 20 minutes of the season.

They started the second half on fire and showed their intent early with many forward forays looking for a path to goal. It wasn’t until the seventh minute of the second period when a sweetly worked free-kick saw Dylan Aitolu put his mark on the score sheet. With the momentum firmly in the Boomers favour, the Raiders started to crack, showing a deal of desperation and at times, panic in their play. A goal to Jayde James-Ward in the 12th minute levelled up the match and saw the intensity lift to yet another level.  With Jamie-Lee Guo playing like a beast between the sticks, the court players allowed themselves some freedom to stay high up the court. A back post tap in to Elie Darwich from a Jayde James-Ward assist in the 17th minute gave the Boomers the lead for the very first time in the match and with three minutes left to hold on for a famous victory.

And indeed they did hold on, with Elie Darwich and Jayde James-Ward rotating the defensive role on Jalloh, they managed to nullify the biggest Raiders offensive threat. But of course, a good team is more than one player and the other Boomers court players needed to shut down the other paths to goal.

It was with great relief then that the referees blew the final whistle to give the Boomerangs Youth Men an epic victory over a very highly fancied Raiders outfit and a very well deserved Championship trophy.
Goals to Jayde James-Ward, Dylan Aitolu, Elie Darwich

Open Women: Boomerangs 6 – 1 Eastern Suburbs Hakoah (ht 5 – 0)
The open age women were courtside watching the back end of the youth Grand Final playing out. It certainly gave them some inspiration – which manifested itself in the best half of futsal this team has played all season.

They blew the Hakoah ladies off the court in the first half, dominating possession, court position and in the second half of the first period, with a barrage of goals to almost close out the game in the first half.

A goal to Michaela Day in the seventh minute commenced the first half rout with a pass intercept in the backcourt which she took deep into the front third to slam home past the Hakoah keeper. Twelve minutes into the match and Ash Garrity subs in and promptly knocks another home from a terrific length of the court assist. The fifteenth minute again saw Garrity penetrate the offensive ‘D’ to be fouled by the keeper who received a yellow card as the Boomers were awarded a six-metre penalty. Miki Day stepped up to hammer it home. 3-0 with still some time in the first half.

With three minutes to play in the first period, Grace Basser-Silk deftly chipped the keeper (under a deal of pressure) from outside the D, after receiving another quality assist. And in the shadows of the halftime break, Rachael Corbett added another to her decent season tally of goals. Five goals to nil in the first half, and a totally dominant display from the Boomerangs women.

The only way the ladies could lose this would be to back off and take it easy in the second half, which fortunately they didn’t do. Hakoah scored their first and only goal halfway through the second period, which was responded to almost immediately by Corbett who bagged her second for the match.

And that’s how it ended, a 6-1 totally dominant performance that blew away the minor premiers – a team that had lost but two games all season and came into the finals series on the back of a winning streak of seven matches.
Goals to Michaela Day (2), Rachael Corbett (2), Ashlyn Garrity, Grace Basser-Silk

So a successful day for the Boomerangs club with a return of three Grand Final wins from the four contested and from six teams that competed in the finals’ series. Indeed the three wins makes Boomerangs FS the most successful club in the FNSW PL2 finals series for 17/18 with Sydney City Eagles winning two (a great effort from only two contested) and no other club taking home more than a solitary Championship trophy from the day (excluding AWD results).