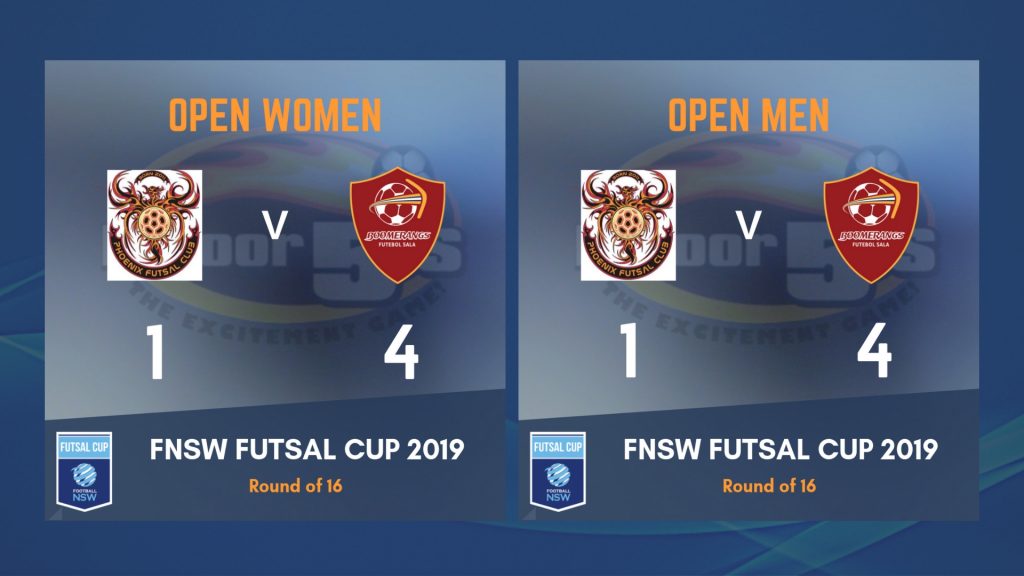 However, the Phoenix senior teams are never to be taken lightly as they are always full of energy, intent and effort. And for these two matches, it was no different.

For photos of the two R16 Futsal Cup matches head to the Boomerangs photo site.

WOMEN
A frantic first half of the women’s match saw the Boomers have the vast majority of the possession and similarly, court position. But a goal against the run of play had them trailing with three minutes to play in the first half. Fortunately, the Boomerangs ladies were able to level it up when Miki Day slotted one home with seconds remaining on the clock, leaving it all square at the break.

The second half saw the Boomerangs women take greater control of the match and play it more on their terms. Within four minutes of the restart, this produced the desired result as Maddie Perceval tapped in from close range after some good lead up work by Stella DeMarco.

Maintaining control and dictating the pace of the game helped the Boomers both in defence and attack and saw Ella Brown grab the third halfway through the second period. To put the icing on the cake, Nichole Jalocha slotted home the fourth after some great interplay with Steph Hedditch, with five minutes to play and to virtually seal the match.

Some solid defence in the final five minutes to top off a dominant match saw the ladies secure the win, 4-1, to progress to the quarter-finals.

MEN
The men’s match started as frantically as the women’s with the run-and-gun approach of the Phoenix not allowing the Boomerangs to settle into any kind of routine.

Phoenix scored first in the match – in the fifth minute from a fast break after the Boomers turned the ball over high up the court. The lads were feeling the pressure from Phoenix and had to work hard to keep them at bay until a Jayde James-Ward goal in the thirteenth minute gave the men some much-needed confidence. It remained all square at the break with a single goal a piece.

The half time break allowed the Boomers men to regain their composure and to go back to their game plan of control, intensity and structure. This paid off almost immediately as Jono Ciminelli slotted the third soon after the restart.

After taking the lead the Boomerangs men worked hard to maintain their dominance and to work relentlessly in their full-court defence to not give Phoenix the sniff of a second goal. A neat Ryan Quarmby goal in the fourteenth minute of the second period reinforced the dominance the Boomers were now showing across the court.

They comfortably held on to this lead until with a minute to play in the match, Boomerangs newbie, Arlo Hook snuck home the fourth (his first for the club in FNSW competitions) to put a full stop on the match.

The quarter-finals of the FNSW Indoor5s Futsal Cup will be held in the first two weeks of November, with the exact dates confirmed after the Round of 16 is completed (they will again be midweek matches on a Tuesday or Wednesday evening). Matches will be at Valentine Park and both men and women will play on the same night.