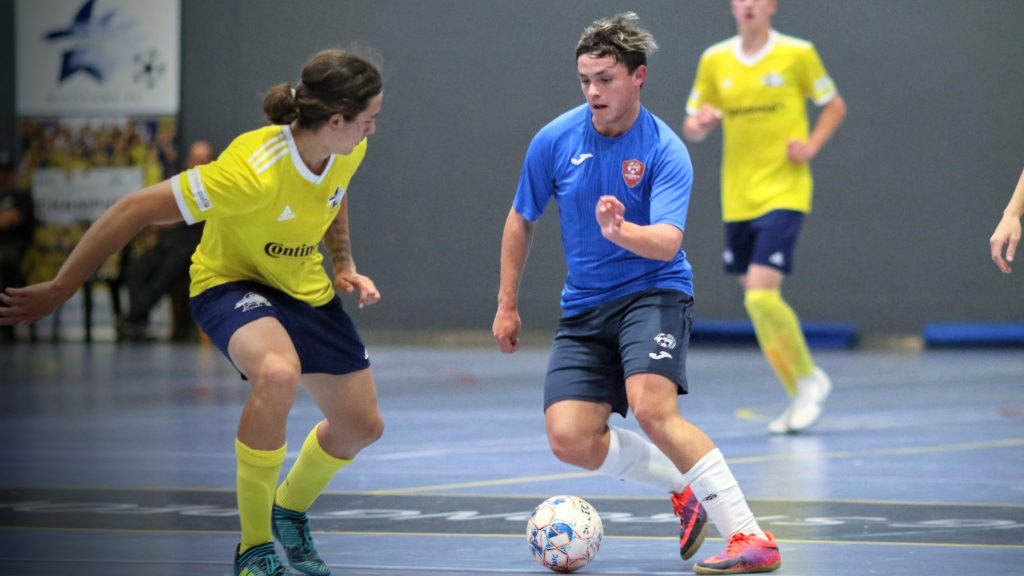 Round 5 of the 2019 Football NSW Premier League 1 competition saw the Boomerangs on the road again to the Morris Iemma Indoor Sports Centre at Riverwood to take on Enfield Allstars.

A full array of development squad matches were played with some terrific performances from all the teams, racking up a couple of wins and playing some high-quality futsal.

There continues to be a growing number of good performances across all age groups and it is clear that the players and teams are now getting more used to the higher level required at the Premier League 1 level.

A couple of wins in the older age groups and a much more competitive performance all round gives hope for the remainder of the season at this level.

The 12 boys and 13 girls both had good halves, but could not sustain the effort for the full 40 minutes.

The youngest competitive boys were right in the match up until half-time, after the score stood at 1-1 at the break. However, they could not sustain this competitiveness for the second period.

The 13s were also competitive, but in the second period when they had already conceded too many goals in the first half. Matches at this level are won with consistent effort and competitiveness for the whole match.

14 boys also showed that they were competitive with the Enfield team for the first 20, and could have caused the hosts some grief had they scored first in the second period. However, momentum went the way of the home side as they overcame a travelling Boomers team with three 12 boys including Josh Smith in goals who put in a brave effort against some powerful shooting.

The 15 girls continue to improve every week and this result showed they again can hold together a decent defensive structure. They need now to build their scoring capability on top of this backcourt effort.

The 16 boys match was lost in the first half as they conceded four goals without scoring themselves. A much improved second-half effort saw them convert twice while stopping the home side from bothering the scorer. Two halves of effort are required to win these matches.

The 17 girls were once again competitive – especially in the first half and it was a match for their taking at the break. However, the Allstars had a stronger second half showing more desire for goals, which was ultimately the difference.

The youth men looked in this match from the get-go but some sloppy defence allowed the home team to slot three goals in the first period of play. Some real determination and huge effort from all players that hit the court secured them second-half goals, giving them momentum and energy to run over the top of the Allstars as the clock wound down. A terrific spectacle and a deserved win for the lads.

The women looked determined from the outset to rack up some competition points, and did so with relative ease, even as Enfield kept pace with them in the first period. Enfield’s solitary goal was fortunate after a defensive mishap from the last line of Boomerangs defence.

The second half saw them lift their intensity and aggression towards goal as they knocked home the goals required and kept a solid defensive effort for the final 25 minutes.

The men were once again right in this match until the death – even after Enfield had looked to take momentum soon after the break to take a 3-0 lead. With eight minutes to play, the visiting Boomers went with a fly keeper – leaving the goal mouth unattended in an effort to reduce the deficit.

This, of course, comes with a degree of risk, and whilst they did manage to grab a goal back (through a handball penalty), they also conceded in the final minute of the match as they pressed hard to grab a second. The Boomers played the powerplay well and had Enfield scrambling in defence – but as the results showed, they did enough to stop the visiting Boomerangs scoring the goals required to secure competition points.

NEXT WEEK
Next week the club is on the road – up against Mountain Majik in Blacktown.