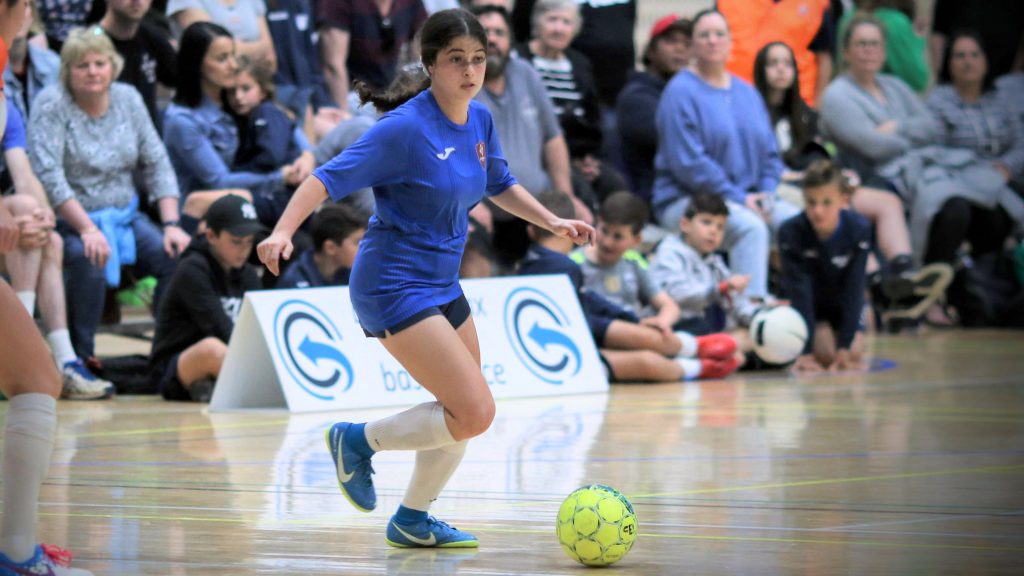 Development Squad Matches
Magic has a strong development program across both their young girls and boys that always provide a significant contest for the Boomerangs youngest teams. The five matches, across eight, nine, ten and eleven boys and 11/12 girls were highly entertaining, and in most the Boomers squads held their own, and competed strongly.

It was terrific to see such a great crowd of family and supporters from both clubs there to support and cheer on their young players and teams.

12 BOYS:
Boomerangs 1 – 7 Magic (ht 0 – 4)
The 12 boys are slowly building their teamwork and understanding and will produce better results as the season progresses. Unfortunately, early in the season, they have come up against a couple of really strong teams that have tested them.

After a first half where they were dominated, across the second half, they showed more steely resolve to compete more solidly and managed to score one themselves.
Goal to Marcus Agnello
Ladder Position: 8th

More game time together for this unit will benefit, as will a focus on structures and defensive options. They will improve, but for now, they’re a bit short of the standard required at PL1 level.
Ladder Position: 8th

14 BOYS:
The 14 boys match was postponed by agreement due to a conflict in scheduling between Premier League Futsal and a football training camp/competition that affected both teams.
The match will be played at a later date.
Ladder Position: 5th

15 GIRLS:
Boomerangs 0 – 5 Magic (ht 0 – 2)
The 15 girls were right in this match in the first half and looked to have some decent scoring chances, building on their improved defence.

Unfortunately, they couldn’t maintain this standard in the second half, and the Magic girls came home with a flurry, scoring a further three goals and lifting their defensive intensity to make it difficult for the Boomers girls to build up any decent offensive plays.
Ladder Position: 7th

16 BOYS:
Boomerangs 4 – 3 Magic (ht 2 – 0)
The 16 boys have responded to the thumping given to them in Round 1, by lifting across the court to beat a well-drilled Magic team.

The win should have been more comfortable, however, after the Boomers scored two in the first period and the first in the second half, the visitors played a fifth-man powerplay and scored three quick goals in succession to grab back half the competition points.

However whilst they were brave to continue the powerplay to try and grab a dramatic comeback win, it was the Boomers that scored the late on, as Magic lost possession whilst attacking and Cal Amey slotting home into the vacant Magic net from distance.

A terrific game, and positive result, that was made more difficult than it should have been after the boys led by three with not long to go.
Goals to Noah Dowling (2), Bailey Sorenson, Cal Amey
Ladder Position: 5th

17 GIRLS:
Boomerangs 4 – 4 Magic (ht 2 – 2)
After their win in Round 1, the 17 girls were feeling confident that they could match it with the visiting Magic.

Magic though, had other ideas and started strongly, and making the scorer work first by converting twice halfway through the first stanza. The Boomers girls lifted though and eliminated the deficit by scoring two themselves before the break.

The girls came out with intent in the second half and scored two quick goals grabbing back the two-goal lead. But Magic was not going to stop, and they retaliated almost immediately and then netted the equaliser with just three minutes to play.

An exciting and even game, but one which the Boomers think they let slip by conceding in the dying minutes of the match.
Goals to Ella Brown, Ellen Brown, Stella De Marco, Alex McKenzie
Ladder Position: 3rd

YOUTH MEN:
Boomerangs 1 – 6 Magic (ht 1 – 5)
The youth men were never in the hunt in this match with the visitors starting the game far stronger and scoring three goals in the first ten minutes, to which they added another two before the break.

The lads lifted their game in the second half and managed to break even at one goal apiece, but it was the slow start and lack of early defensive focus that let the team down.

This is a talented squad of players, so the results will certainly improve as the season progresses.
Goal to Leon Michl
Ladder Position: 8th

OPEN WOMEN:
Boomerangs 3 – 5 Magic (ht 2 – 2)
This was another game that ‘got away’ after the team looked well in control for most of the contest. They were right in the hunt, with the match all square at half time after an arm-wrestle for the first 25 minutes.

The home side scored first in the second half and was looking reasonably comfortable at 3-2 with ten minutes to play, but the visiting Magicians lifted their intensity and their stronger desire showed as they scored three in the final ten minutes to take the match.

The Boomers women have loads of talent and a solid roster of players – it will only be a matter of time before things start to click and they start registering the wins.
Goals to Ellen Brown, Ash Garrity, Bronte Pyke
Ladder Position: 7th

OPEN MEN:
Boomerangs 1 – 2 Magic (ht 0 – 0)
Men’s matches against the highly credentialed Magic are always entertaining, and the Boomers have a solid track record against this champion team.

The first half was as fast and intense a period of futsal you could see without a goal being scored. Magic had the best of possession and court position, but it felt as though a goal could have come at either end. Both teams had several opportunities but the defences of each held firm.

The second half saw the Magic focus more on controlling their possession and they were more focused on not turning the ball over, and getting off a decent shot on goal. Two precision strikes off the boot of Anthony Haddad hit the back of the net within the first two minutes of the second half.

The Boomers lads lifted in intensity and while holding off the strong Magic team at their defensive end, were themselves being more creative in their offence. It took though until the second last minute of the match before they could level it up through the boot of Jayde James-Ward, leaving too little time to convert a second.

A cracking match, and again demonstrating that the Boomerangs open men definitely deserve a seat at the PL1 table.
Goal to Jayde James-Ward
Ladder Position: 3rd

NEXT WEEK
Next week the club is on the road for the first time in the 2019 season, with a trip to Alexandria to take on the Eastern Suburbs Hakoah club.