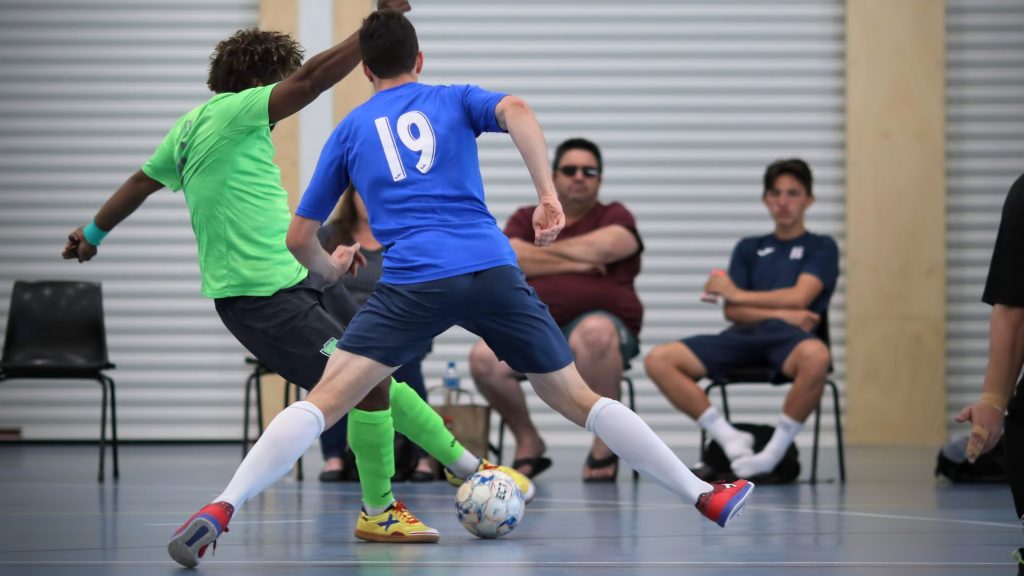 Round 13 of the 2019 Football NSW Premier League 1 competition saw the Boomerangs at home and due to the unavailability of the AIS, back at Q-One Indoor Sports Centre in Queanbeyan for the final home round of the season.

Four development squad matches were played against Majik opposition, with the visitors bringing a good selection of their strong junior cohort down for the trip to Queanbeyan. These matches are always competitive and the youngest of the Boomers performed admirably.

The 12 boys were right in this match and performed strongly for the full 40 minutes. Their second half was especially impressive, limiting the visitors to a single goal – but unfortunately weren’t able to score themselves to take match points.

The 13 girls were once again up against a strong athletic top-four opposition. It is a credit to the coaching staff and the girls themselves that they maintain a positive attitude and go into each game with such energy and enthusiasm. They will benefit from this in years to come.

The 14 boys handled themselves well against one of the stronger teams in the competition. They maintained a strong defensive mindset throughout and managed to score a couple of goals in the second half.

The 15 girls were also up against a top-four side. Throughout the match, they maintained their intensity and running. Unfortunately, the Majik defence was structured and tight and did not allow for many chances on goals by the Boomers girls.

The 16 boys thought they were in with a big chance for a victory in this match against a Majik team that sat just one position higher on the competition ladder. Their defence was strong and held firm until halfway through the second half when a single goal opened the flood gates and three were scored within a five minute period (with a final goal on the whistle to end the game). A disappointing result for the boys as they could – and should – have managed to secure competition points from this match.

After a disappointing last weekend resulting in two draws, the 17 girls knew they had to win their final two matches (with healthy margins) and rely on other results going their way to make finals. As such, they started, and continued to play, the entire man with a rotating fifth-man power play. This worked to help them score goals, but did also leave them vulnerable and they conceded a couple of goals from turnovers. The match was interesting in that Majik also played without a keeper for periods of time. This result now ends the finals aspirations for this team.

The youth men were up against a top four team keen to cement their finals spot with a win. And the result was never in doubt after the visitors took a three-goal advantage into the break. A more intense second half saw the Boomers try and claw their way back, but each time they scored, the opposition would grab one back.

The Boomerangs women were confident of picking up some competition points from Majik – a team that sat just one place above them on the ladder. After an arm-wrestle of a first period, the visitors jumped the homeside after the break scoring almost immediately. Unfortunately, they also defended the lead strongly and were able to stop all Boomers offensive forays. They scored a second towards the end of the second half and in the end took the game comfortably.

The Boomerangs men‘s match was always going to be an intriguing match up. The visiting Majik needed to win to keep their finals hopes alive, and both these teams were scheduled to meet again in the mid-week Cup Final.

The game started as an arm-wrestle with both teams focussing on a strong defence, with a structured and well-practiced offence.

A goal to the Boomers’ Ryan Quarmby (assist Nick Rathjen) in the eighth minute (just 45 seconds after he hit the court), opened the scoring and gave the home side the advantage after Majik had failed to convert a few opportunities. Boomers first half keeper, Zac Sorenson, had a strong half of futsal.

A reply by the visitors was quickly cancelled out by a Michael Rinaudo goal (Jayde James-Ward assist) in the 16th minute to take the lead back to 2-1, where it remained till the break.

The start of the second half was again an arm wrestle with both sides defensive efforts cancelling out their opponent’s offence. Resorting to fifth-man, the visitors tried to get back into the match, but could not score from the power play.

A third goal, individual effort, to Elie Darwich, (after an up court steal by Finn Jurak) with ten minutes remaining, meant the Boomers had a lead they could protect – and they did.

It was a cracking game – one that ended the Majik’s 2019 final’s hopes – and that set up for a classic rematch in the mid-week Cup Final.

NEXT WEEK
Next weekend the club is both on the road for the final round of the season, against Mascot Vipers.