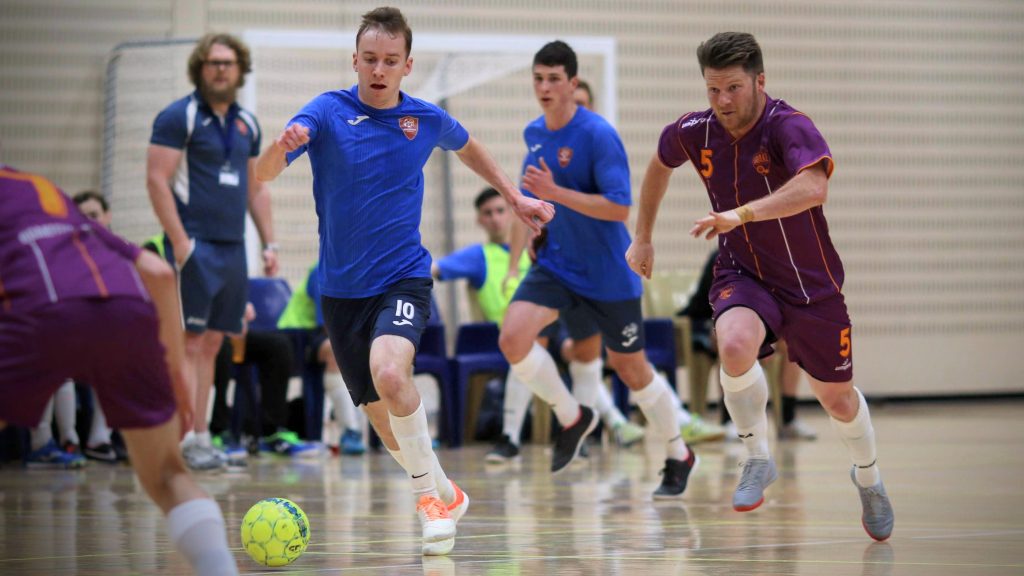 It is important to give the youngest players experience playing against strong teams from out of Canberra to expose them to the more physical and faster game in preparation for the competitive leagues from ages 12 and upwards.

12 BOYS:
Boomerangs 1 – 5 Quake (ht 0 – 2)
The 12 boys this season consist of mostly players that were playing development squad last season. They have plenty of talent and lots of will, but they will need some time to get adjusted to the full competitive nature of this level of futsal.

The boys matched it for most of the game with their Quake opposition, but a few key defensive lapses allowed the visitors to grab a couple of easy goals each half.

The loss by four wasn’t a bad outcome and these boys will certainly look to step up their defensive efforts as the season progresses.
Goal to Oliver Jurjevic

13 GIRLS:
Boomerangs 0 – 16 Quake (ht 0 – 10)
The 13 girls this season comprises three players from last year’s development squad and a bunch of players new to futsal at this level. It was expected that this team would take a while to settle into the competition.

What wasn’t expected was the pure quality futsal exhibited by the visiting Quake girls, who really put on a clinic in how to play the game. They were disciplined, took no backward step, and held their structures very well both in attack and defence. There is no doubt the video will be reviewed and some lessons learnt about how to play futsal at this level – as displayed by the Quake girls.

As for the Boomers girls – they can but grow and get better. The team is filled with quality players who need some time together to gel and demonstrate the qualities futsal players need. Onwards and upwards!

14 BOYS:
Boomerangs 2 – 1 Quake (ht 1 – 0)
The 14 boys played with discipline and skill to take the three competition points from the visitors.

In an unusually low scoring match for this age group, the focus was on strong defensive structures by both teams. A couple of effective attacks on goal by Angus Pitkin for the home side were, in the end, the difference.

The whole team should be congratulated on how they worked solidly as a unit and held firm in their defensive back-court. They attacked with adventure and zeal and were able to break down the opposition’s defence on more than a few occasions.
Goals to Angus Pitkin (2)

15 GIRLS:
Boomerangs 2 – 5 Quake (ht 2 – 2)
Much like the 13 girls, the 15s comprise mostly graduates from last year’s 13s and a few players new to the club – to complement the three players remaining in this age group from last season’s squad.

They showed their ability to work together as a unit very early in the match and were able to score two goals in the first half. Unfortunately, they faded in the second as the visiting Quake girls stepped it up a gear.

This was a good first-round hit out for the girls, who will benefit from the run together and will certainly improve as a team as the season progresses.
Goals to Jada Lamond, Maya Osmond

16 BOYS:
Boomerangs 1 – 8 Quake (ht 0 – 4)
The 16 boys match was pushed forward on the day’s schedule to allow for a few players (and the coach) to get to their NPL Grand Final which clashed with the originally scheduled time. We thank Quake for their understanding in shifting this match.

However, the earlier start time seemed not to agree with the team as they were totally outplayed and outmuscled across both halves. Quick, early goals by the visitors put the lads on the back foot and in playing ‘catch-up’ for most of the game, they had trouble holding their defensive shape and structures.

A consolation goal five minutes from time, being one of only a few positives to take from the match.
Goal to Charlie D’Addario

17 GIRLS:
Boomerangs 2 – 0 Quake (ht 0 – 0)
The bubble of Boomerangs strong female talent has squeezed itself into the 17 girls for the 2019 season. This team, therefore, has great expectations being placed upon it to be able to perform consistently strongly in the top-flight competition.

The first half of the match was a defensive arm wrestle, where neither side could penetrate freely forward and put the opposition’s goal under too much threat.

The second half saw the game open up as players tired and teams became a bit more desperate to score. The Boomers 17s held their defensive structure together strongly whilst at the offensive end were able to be a bit more creative, leading to two goals – the first a cracker from Ellen Brown – in the space of four minutes midway through the second period.

A terrific start for the team and as they again build as a unit, and get back into ‘futsal-mode’, they should cause plenty of teams at this level some concern this season.
Goals to Ellen Brown, Elke Aitolu

YOUTH MEN:
Boomerangs 1 – 4 Quake (ht 1 – 3)
The youth men’s match started more sedately than a lot do at this age group with both teams seemingly content to ease themselves back into the season.

However, about halfway through the first stanza, the visiting Quake youth came to life, slotting three goals in a short period of time to take the game by the scruff of the neck. A response goal by Andrew Noack, kept the Boomers youth in the match as they went into the break two goals down.

The second half saw a far more defensive effort from both teams with each side giving away little. This, of course, helped the team in the lead, and it seemed that whatever the Boomers youth tried, the Quake lads were up for it defensively. Off the back of their solid defensive effort, Quake slotted a fourth halfway through the second half and held their ground to not allow the Boomerangs Youth to score again.
Goal to Andrew Noack

OPEN WOMEN:
Boomerangs 1 – 4 Quake (ht 0 – 2)
The Boomerangs women were keen to kick the season off on a positive note, however, a few unavailable players (due to football commitments), and an early injury to mainstay Rachael Corbett meant they were playing from behind for the whole match.

The teams traded blows for the first quarter of the match, without either team bothering the scorer. However, with eight minutes remaining in the first period, Quake converted via Claire Walsh’s boot. They doubled their lead a few minutes later to take a two-goal advantage into the break.

The second half saw the Boomers ladies throw everything at the visitors but to no avail. The Quake defence held firm, and it was they, with nine minutes to play, that slotted home another. Olivia Gurney grabbed one back for the home side almost immediately, but in an effort to reduce the two-goal deficit, they threw everything forward, resulting in Quake’s fourth with just four minutes to play.

This was a reasonable hit out for the Boomers top women’s side against a team that finished last season playing finals. They will though, need to tighten up their defence and be more clinical at their offensive end if they are also to find themselves in the mix to play finals futsal this season.
Goal to Olivia Gurney

OPEN MEN:
Boomerangs 4 – 1 Quake (ht 1 – 0)
The Boomerangs open men’s team have been champing at the bit to compete in this PL1 season. The men’s team always seem to perform well at the top level and match up well with many teams in the PL1 competition.

Quake struggled last season at the men’s level so the Boomerangs boys knew that a solid performance would see them take the points. And indeed that was the way it panned out. A solid defensive structure and loads of energy and speed going forward enabled the younger and fitter Boomerangs to not only hold their own against this proud PL1 club but to also run over the top of them in the second half.

A super first-up performance by Nick Rathjen and Ben Basser-Silk helped the Boomers control the match. New to the men’s age group also were Jayde James-Ward, a graduate from the youth team, and Elie Darwich, back from a stint overseas with the Lebanon national youth side, who both put in impressive shifts and brought with them a load of youthful energy. A top first-up performance also from ‘new-to-the-club’ Arlo Hook, who contributed valuable minutes throughout the match.

A solid win that will give the lads confidence and will allow them to head into the season knowing they can compete strongly at this level.
Goals to Ben Basser-Silk (2), Nick Rathjen, Elie Darwich

NEXT WEEK
Next week the club is again at home taking on last season’s Club Champions, Inner West Magic. It will definitely be a tough round for the club, but everyone that travels down the Hume Highway is aware of how hard they need to work to win matches at the AIS.