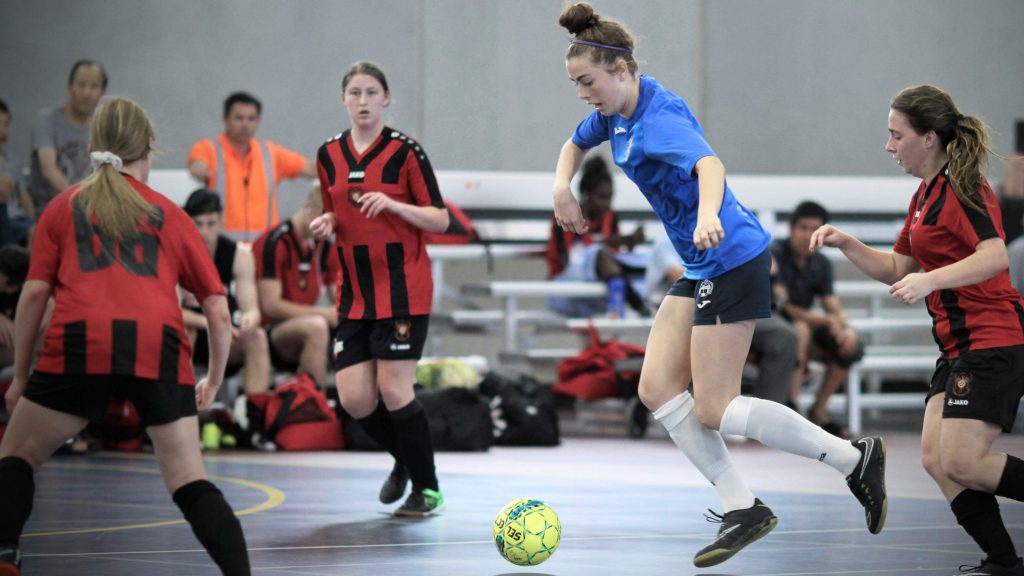 13 Girls: Boomerangs 10 – 2 Phoenix Futsal (ht 5 – 1)
Whilst the Boomerangs 13 girls had previously tasted victory in this competition, this win was by far a more complete performance. A five-goal to one first period was replicated in the second half as the girls started to put into practice everything they have been learning over the past few months.

14 Boys: Boomerangs 2 – 3 Phoenix Futsal (ht 1 – 1)
The 14 boys continue to improve every week and have significant potential to cause quite a few upsets in the second half of the season. An untimely clash with junior NPL (football) trials (in November?) and some injury meant that six regular 14 boys players could not make the trip up to Hornsby this weekend.

The team that did hit the court performed admirably against an opposition sitting in the top four on the competition ladder. And like their effort against SD Raiders seven days earlier, the boys worked hard at both ends of the court and really made their opposition earn their win. When the club is able to regularly get the full complement of players on the court together, this team will certainly be amongst the winners over the remaining eight rounds of the season.
Goals to Thomas Barbatano, Nick Pratezina
Ladder Position: 7th ( – )

15 Girls: Boomerangs 5 – 0 Phoenix Futsal (ht 3 – 0)
With this victory, the 15 girls continued their unbeaten run and have lifted themselves to top spot on the competition ladder.  Knocking off the team that was sitting atop the ladder so convincingly was a tremendous effort by the girls and shows their potential to be a challenger for the premiership and for a good run in finals.

It was pleasing to see all players again stepping up to the plate and being accountable, and importantly to be able to spread the goal scoring across the team. A maiden Boomerangs hat-trick for Ayla Robertson, a fitting return on the work that she has been putting in and the potential she has shown across the season to date.
Goals to Ayla Roberston (3), Tayla Hampson, Jade Brown
Ladder Position: 1st ( +1 )

16 Boys: Boomerangs 3 – 2 Phoenix Futsal (ht 2 – 0)
The 16 boys match was an almighty battle between two fast, aggressive and attacking teams.  The travelling Boomers started the stronger and two first-half goals to Cale Brown made sure they went into the break with an advantage.

However, the tenacious Phoenix 16s would not lie down, and they wiped out the deficit and were coming home strongly on a wave of momentum. Some serious defending by the Boomers 16 boys kept them in the match, and a nicely worked goal to Luca Macor after a nifty 1-2 with Rob Tkatchenko, with only two minutes on the clock, grabbed a victory from what looked like it was going to be an upset defeat.

Like the 15 girls, the 16 boys remain the only undefeated team in their age group with four wins and two draws from the six matches to date this season. They sit in second position on the competition ladder behind the Taipans on goal difference alone.
Goals to Cale Brown (2), Luca Macor
Ladder Position: 2nd ( – )

18 Women: Boomerangs 2 – 3 Phoenix Futsal (ht 1 – 0)
The Boomers 18 women’s team have struggled in the past few outings to get a rhythm up and to put goals on the board when it counted. The team definitely has what it takes to win these close encounters against tough opposition, but need to learn to be a little more ruthless.

This match saw them hit the scoreboard first and take the points in a fairly even first half. However, the second period saw them concede three goals through a brittle defensive line. The recent two single-goal losses have been the difference between their current fifth position on the competition ladder and a top two spot. And these are exactly the matches they need to win to put themselves forward as real contenders this season. The good news is, there is plenty of time left in the season to remedy this and there is an abundance of talent in the team.
Goals to Maddie Perceval (2)
Ladder Position: 5th ( – )

Youth Men: Boomerangs 2 – 2 Phoenix Futsal (ht 0 – 2)
Like most seasons, the youth men’s competition is again a close contest where any of the eight teams could win any match on their day.  Phoenix Youth at home is always a challenge and it was no surprise that they started the stronger of the two teams and could accrue a two-goal advantage by the break.

Credit must go to the Boomerangs Youth for getting themselves well and truly back into this contest in the second half. Their defensive effort was huge and they put their bodies on the line when it counted.  Two goals to Rob Tkatchenko midway through the second period brought hope of a win, but alas, neither team could pass the opposing keeper in the final eight minutes of the match.

Open Women: Boomerangs 10 – 0 Phoenix Futsal (ht 5 – 0)
The Boomerangs women continued their rich vein of form to take out this match against yet another of the top four contenders this season. The most recent four matches have seen the ladies score a massive 32 goals and concede only twice.

Probably the most pleasing aspect of these results is that they are not only against weaker sides but also against potential finalists. At this stage of the season, it appears as though the only other contender in the competition is Raiders Futsal, a team that has scored as freely as the Boomers ladies but conceded at twice the rate.

It is certainly the solid defensive effort on which these results are built, with a miserly six goals only conceded so far this season (at a single goal a game), and at the offensive end, with any player that hits the court being able to score, with all thirteen of the regular playing group hitting the score sheet at least once this season so far.
Goals to Nichole Jalocha (2), Rachael Corbett (2), Ash Garrity, Mikki Day, Stella De Marco, Ellen Brown, Maddie Perceval, Bronte Pyke
Ladder Position: 1st ( – )

Open Men: Boomerangs 1 – 2 Phoenix Futsal (ht 1 – 1)
The men’s match was again another frustrating single goal loss where the huge effort put in by the team at both ends of the court was not rewarded with three competition points.

The Boomers men got off to a great start with a first-time strike by Wilsener (from a Giovinazzo assist) at the five-minute mark of what was an evenly contested first period of play. They conceded a late goal from a defensive lapse just three minutes from the half-time whistle to again see the match all square.

The second half was an end-to-end affair with both teams wasteful of the opportunities they created – which were not many given the defensive intensity shown by both sides. A converted opportunity (an individual effort by Chance) to Phoenix some five minutes from full time gave the travelling Boomers little time to get back into the match.
Goals to Jake Wilsener
Ladder Position: 6th ( – )

NEXT WEEK
Next weekend has the Boomerangs club at home for the final round of the first half of the season against West City Crusaders, a club that has struggled a little with the level of PL2 after being promoted from State League in the off season. The Boomerangs club currently sits place smack bang in the middle of a very congested PL2 Club Championship that has only eight points (fewer than three wins) separating top spot from sixth. This season, more than ever, wins will be crucial from now till the end of the season.