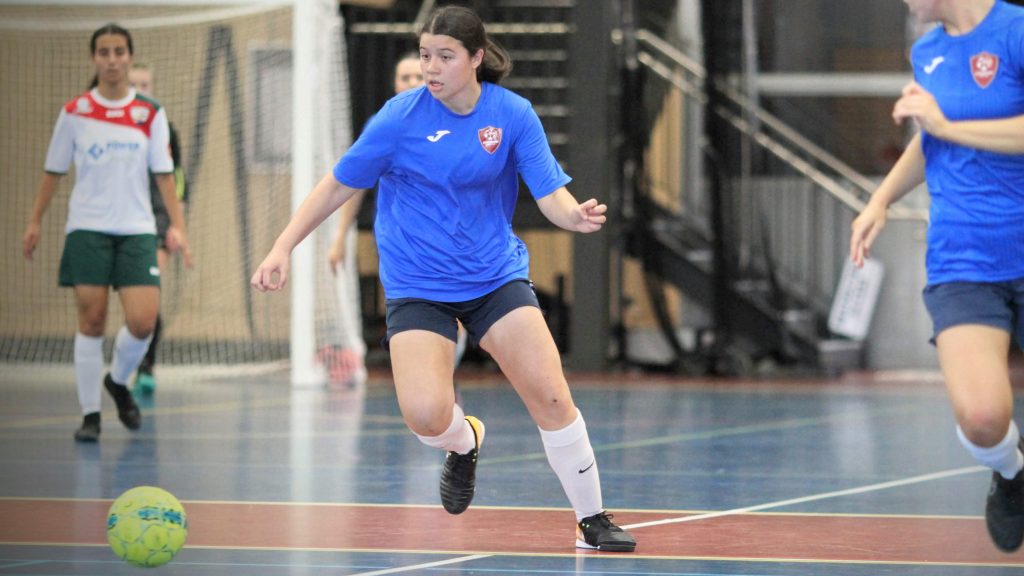 12 Boys: Boomerangs 1 – 11 SD Raiders (ht 1 – 6)
The 12 boys again struggled to put together a full complement of ‘at-age’ players to be able to hold off a determined SD Raiders outfit. Each week has seen key players absent and while this has allowed for several 10 and 11-year-old boys to get some experience, it has not allowed for the core 12 boys team to gel and get good court time together.

Hopefully, with other distractions now over (holidays, representative duties, outdoor commitments) this will allow the team to start coming together more often and producing the results the core group of 12-year-olds are capable of.
Goal to Daniel Kenning
Ladder Position: 8th ( – )

13 Girls: Boomerangs 3 – 4 SD Raiders (ht 1 – 2)
The Boomerangs 13 girls are really starting to get into stride this season. But with these improved performances needs to come consistent wins. They definitely have the talent – and depth – and should now be pushing hard for a top-four finish and to play in finals at seasons-end.

This was one of those games where they played very well for long periods, but some lapses in concentration allowed the home team to score goals at crucial times.
Goals to Maya Osmond (2), Reilly Yuen
Ladder Position: 6th ( -1 )

14 Boys: Boomerangs 1 – 3 SD Raiders (ht 1 – 2)
Before this match, there was not much hope held for a positive result given the records of both teams so far this season. Whilst the Boomers 14 boys had yet to win a game (with a -12 goal differential), the SD Raiders were sitting on top of the competition ladder having not yet dropped a point (and with a positive goal difference of 23), scoring on average seven goals a game against all comers.

Within this context, this was probably the most satisfying result of the day’s matches. And while not yet registering their maiden win for the season, the 14 boys can be proud that they held the SD Raiders to three goals, and managed to score a goal against a defence that had let through only five goals in four matches.

The boys should take a lot of positives from this match and feed that into the rest of the season. No doubt much better results will come.
Goal to Nabil Djomani-Ousmane
Ladder Position: 7th ( – )

15 Girls: Boomerangs 6 – 1 SD Raiders (ht 3 – 1)
With this comprehensive victory, the 15 girls maintained their unbeaten record, and are now a single point behind next week’s opponents, Phoenix Futsal. They started this match cautiously but built their tempo and momentum, and once they had built a two-goal break, they really kicked into gear.

A polished performance across the board, led by the goal-scoring prowess of Elke Aitolu and on-court leadership by Teah Hayes. The real test will be next week, in a top-of-the-table clash that might go a long way to telling us how the rest of the season will play out.
Goals to Elke Aitolu (3), Teah Hayes, Jade Brown, Meg Roden
Ladder Position: 2nd ( +1 )

16 Boys: Boomerangs 7 – 1 SD Raiders (ht 1 – 1)
The 16 boys were full of confidence going into this match after some terrific performances in recent weeks, and knowing that their opposition had not yet hit full stride this season, with only a single win from their four previous outings.

After a tight first half where each team could only manage to score a single goal, the Boomers came out of the break on fire scoring two goals in the first three minutes after the resumption. No doubt frustrated by his team’s inability to further break down the Boomerangs defence, the SD Raiders coach took an early gamble on a fifth man power play – with around ten minutes to play. Unfortunately (for SD Raiders), their possession control was not what it should have been under the press of the Boomers and the visitors scored four goals against an unprotected net.

A solid win by the lads, who need to maintain their consistency to continue on their winning ways (like the 15 girls, they also remain unbeaten after five rounds).
Goals to Murphy Shaw (3), Luca Macor (2), Leon Michl, Noah Dowling
Ladder Position: 2nd ( – )

18 Women: Boomerangs 2 – 3 SD Raiders (ht 1 – 1)
The Boomers 18 women’s team will definitely feel that this was a game they should have won. After scoring first midway through the first half, they let the lead slip away conceding just before the break.

The ladies retook the lead a few minutes after half-time, but with the home side cranking up the pressure and their intent in the front court, it seemed only a matter of time until they levelled it up again, which they did with just nine minutes remaining in the match.

The momentum was definitely with the SD Raiders and they were able to convert that to another score – the third goal for sharp-shooter Vesna Milivocevic. It seemed that no matter what they tried, the Boomerangs 18s could not find a way to penetrate the home team’s defence.
Goals to Ella-Rose Brown, Stella De Marco
Ladder Position: 5th ( –1 )

Youth Men: Boomerangs 4 – 5 SD Raiders (ht 0 – 3)
This was a most unusual match in which the home side dominated the first period of play and could have added a few more goals to the three that they did score. It was a scrappy, intense and physical encounter where the playing of good futsal seemed – at times – to be a secondary consideration. In many ways, a typical youth men’s match, but from a Boomerangs perspective, no real and consistent execution of gameplan could be seen for any sustained period of play, and the defensive structure didn’t shut down SD Raiders effectively enough in the first 20.

The fact that the Boomers youth worked their way back into the match was a testament to their fighting spirit, but it was a case of too little, too late as the home side took a 5-1 lead before the visitors plied on three goals in the final quarter of the match to make the result look a lot closer than the game actually played out. The lads remain in second position on the ladder behind SD Raiders.
Goal to Nicolas Felizzi (2), Andrew Aitchison, Luca Macor
Ladder Position: 2nd ( – )

Open Women: Boomerangs 7 – 0 SD Raiders (ht 2 – 0)
The Boomerangs women continued their fine form which has now seen them win their last three league matches by a minimum margin of five goals. The team appears balanced, structured and now has the depth to allow them to keep up the offensive pace and defensive pressure through the entire 50 minutes.

Grace Basser-Silk led the way on the score sheet, but the remaining goals were spread equally amongst the ladies – making this a very difficult team to defend (now with 12 different goal scorers over the five league matches played).

If they continue their work rate and apply their training learnings into the game situation, they will certainly be the competition front-runners for the remainder of the season.
Goals to Grace Basser-Silk (2), Mikki Day, Stella De Marco, Ella-Rose Brown, Nichole Jalocha, Ellie Raymond
Ladder Position: 1st ( – )

Open Men: Boomerangs 2 – 3 SD Raiders (ht 1 – 2)
The men’s match was another in a series of matches for the guys where not a lot of what they were trying to execute came off.  The sustained, and in-your-face, defensive pressure by the SD Raiders may have had something to do with that. The home team had five team fouls each half (compared to Boomerangs three and one) and they racked up three yellow cards each half compared to the Boomerangs disciplinary clean sheet for the match).

The three goals scored by SD Raiders could all have been stopped by tougher and more effective defence. Additionally, the two times Boomerangs scored in the match, they conceded just two minutes later to wipe out their advantage.

There are lessons to be learnt from this match (as there is from all matches played – especially losses), but with the team now slipping to sixth place on the competition ladder, they need to get back into the winners circle – and this starts next weekend with an away match to Phoenix Futsal, a club sitting third on the competition ladder.
Goals to Mikey Rinaudo, Daniel Giovinazzo
Ladder Position: 6th ( –2 )

NEXT WEEK
Next weekend has the Boomerangs club on the road again to Hornsby to take on Phoenix Futsal across all age groups. It will be a tough road trip for the club with Phoenix currently sitting second on the Club Championship and the Boomers fourth (although there are only 13 points separating the top six clubs after five rounds of the season).