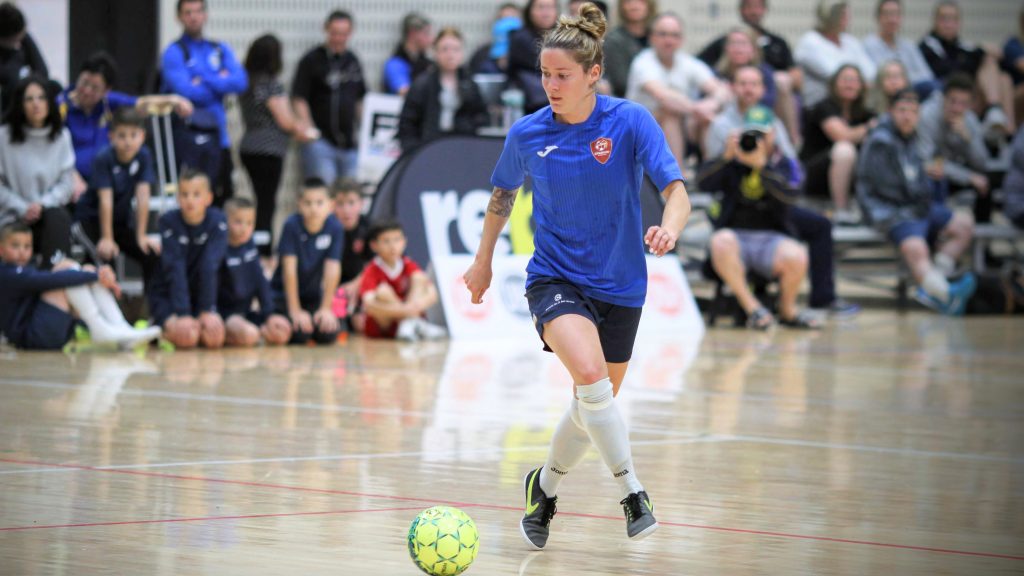 Round four of the 18/19 Football NSW Premier League 2 competition had the Boomerangs club at home for the first time this season, hosting stalwart FNSW PL club Sydney City Eagles. It was terrific to be playing at the AIS once again and certainly nice to not have to travel up the highway after the three consecutive away rounds to kick off the season.

Development Squad Matches
The 10 and 11 boys took on Sydney City Eagles 11 boys team in two matches preceding the competitive matches of the day. The 11 boys matched up well with the Eagles and put together some sparkling play, giving some hint as to their future capabilities. The 10 boys found it a bit tougher, but again showed many positive signs against a tough (and older) opposition.

The Eagles club does not have an 11/12 girls development team, so the early match of the day had the Boomers 11/12 girls take on the 9 boys, in what was mostly a one-sided affair with the bigger and stronger girls dominating for long periods.

12 Boys: Boomerangs 0 – 7 Sydney City Eagles (ht 0 – 4)
The 12 boys again struggled to hold out a stronger, dominant opposition in the Eagles 12 boys. The young Eagles boys were unbeaten prior to this match and showed that they would certainly be in contention for the competition’s honours at the end of this season. The youngest Boomers competitive boys team needs to improve across the board to be competitive in this competition, starting with a stronger defensive effort by all that hit the court.
Ladder Position: 8th ( – )

13 Girls: Boomerangs 3 – 1 Sydney City Eagles (ht 2 – 0)
The Boomerangs 13 girls finally showed what they can do when they convert their chances and build on the good work they are putting in at the defensive end — they are the third best defensive team in the competition after four rounds. Their patient build up work in the front court was rewarded with goals as they moved the ball around to open up the opposition’s defence.

They also showed great resilience building on their two-goal halftime lead to not allow the travelling Eagles to get back into the match. This team promises much for the remaining ten rounds of the competition.
Goals to Izzy Listar, Sofia Palywoda, Maddie Steinacker
Ladder Position: 5th ( +1 )

14 Boys: Boomerangs 2 – 7 Sydney City Eagles (ht 1 – 3)
The Sydney City Eagles have been renowned for having strong senior men and junior boys teams over the many years they have participated in the NSW Premier League competition. It was surprising then to see that their 14 boys had yet to secure a victory over the three opening rounds of the season.

The Boomerangs 14 boys though, could not capitalise on the home court support and take advantage of the Eagles poor start to the season – which had been much the same as their own. Again, it was defensive lapses – repeatedly against fast break situations – that allowed the visitors to score at crucial times in the first half and allowed the visitors to take a two-goal lead into the break.

The second half, rather than seeing a resurgence from the home side, saw the visitors score a further four goals, whilst the Boomerangs could only manage a single goal each period of play. The lads have some work to do to become competitive and win some matches this season.
Goals to Thomas Barbatano, Ethan Yuen
Ladder Position: 7th ( – )

15 Girls: Boomerangs 3 – 1 Sydney City Eagles (ht 2 – 1)
The 15 girls continued their season’s progression with a second win in a row to follow the two draws they opened the season with, to remain undefeated. A nice balance of high defensive pressure and well executed and structured offence meant that they could limit the damage in their own net, whilst scoring at the other end by finishing their patient and well-structured build up work.

Three goals from the same three goal-scorers as last week’s game was the result of a solid contribution from all who hit the court.
Goals to Teah Hayes, Jade Brown, Tayla Hampson
Ladder Position: 3rd ( +1 )

The visitors were quick out of the blocks landing a scoring blow not four minutes into the match – but the Boomers responded almost immediately with a goal to Luca Macor after some neat work by Stef Vucic. A second first-half goal, to Keiran Allen, was a reward for the hard work all the lads were putting in that hit the court.

The match was won though, in the second half, where the Boomerangs boys put in a super defensive effort to stop everything the Eagles could throw at them. Two goals, close together, in the middle of the second period, put the match to bed – although the home team did have to lift their defensive work rate as the Eagles put in a sustained offensive effort to try and get something out of the match.  A solid victory by the 16s that lifts them closer to the top of the ladder.
Goals to Keiran Allen, Luca Macor, Ollie McCarthy, Murphy Shaw
Ladder Position: 2nd ( +2 )

18 Women: Boomerangs 2 – 0 Sydney City Eagles (ht 1 – 0)
Although the scoreline doesn’t really indicate it, the Boomerangs 18 women’s team looked relatively comfortable during the 40 minutes of this match. Built on solid defence, and again, a structured and patient offence, it was only a matter of time until the goals came, and they came for Alex McKenzie near the end of the first half, and for Caity Listar midway through the second.

Having a deep home bench to call on was also a significant advantage as players could run hard for short stints, knowing there were plenty of others on the bench to replace them as they tire.
Goals to Alex McKenzie, Caity Listar
Ladder Position: 4th ( – )

Youth Men: Boomerangs 4 – 0 Sydney City Eagles (ht 2 – 0)
In the three matches the Youth Men had played before this one, they had notched up two wins and a single loss (last weekend) — all by single goal margins.  In this match, it was pleasing to see them take control of most facets of the match to be able to take a two-goal lead at the break and to double that during the second period of play.

A fine effort by all that hit the court, was a contrast to the patchy match had by most last weekend. And continuing good goalscoring form, particularly for Nic Felizzi (5 goals in 4 games) and Jayde James-Ward (4 goals in 4) with solid contributions from many others across the court – including the couple of 16 boys that played up.
Goal to Andrew Aitchison, Nicolas Felizzi, Jayde James-Ward, Luca Macor
Ladder Position: 2nd ( +1 )

Open Women: Boomerangs 9 – 1 Sydney City Eagles (ht 5 – 0)
The Boomerangs women benefitted from having several players returning for this round that had not been available before this weekend. And it’s fair to say they made some decent contributions, with a hattrick to Mikki Day the highlight – including a pearler of a free kick.

This is not to say that the women’s team that took the court in the first three rounds would not have won this match- they probably would have – but they probably wouldn’t have blown away the opposition as the ladies did on this occasion. It was a dominant performance: reminiscent of the Grand Final outing of last season.

All players that hit the court contributed well and helped to break down a shaky Eagles defence. A double to Grace Basser-Silk (one a cracker from outside), returning for only her second game of the season, lead ‘other scorers’ that included contributions from a further four players – including three from the 18s team.

All in all a terrific and dominant display of women’s futsal – that will put other title hopefuls on notice.

Open Men: Boomerangs 1 – 4 Sydney City Eagles (ht 1 – 2)
The men’s match started well for the Boomerangs – with the home team taking an early lead through a trademark Mikey Rinaudo goal in the fifth minute. The Eagles though, are a solid team, and immediately toughened up their defensive structures to take away the Boomerangs men’s ability to freely pass the ball around and create opportunities by breaking down defences.

They responded with a goal of their own in the 12th minute  – and five minutes before the break netted a second to take a single goal advantage into the break. The ‘in-your-face’ pressure that the Eagles apply made it difficult for the home side to gain any momentum, or to find gaps through which they could create opportunities. The Eagles worked hard at their defensive end and this was rewarded with a third goal not long into the second period, followed by a fourth with around 10 to play.

They then sat back and defended their lead – very effectively – even when they had a player red carded, they defended the Boomerangs one-man advantage without conceding, as they did for the final five minutes when the Boomers played a fifth man fly keeper.

The men’s team have a bit of work to do in being able to break down a tight, physical defensive system such as that employed by the Eagles, and to ensure that their defensive efforts hold up under pressure – including defending fast break situations.

A disappointing outcome, that will need to be rectified quickly with some tough matches coming up over the following fortnight, including against fellow PL2 top-four aspirants SD Raiders and Phoenix and against Raiders Futsal in a mid-week FNSW Futsal Cup match.
Goals to Mikey Rinaudo
Ladder Position: 4th ( – )

NEXT WEEK
Next weekend has the Boomerangs club on the road again, this time to newly minted PL2 club, SD Raiders, at Fairfield. This will be the first ever round of matches between these two clubs, and as such difficult to anticipate how the round will play out. However, the club has performed very well across the first four rounds of the season – especially in matches that contribute to the Club Championship – no doubt this round will certainly be a stern test for all Boomerangs age groups.