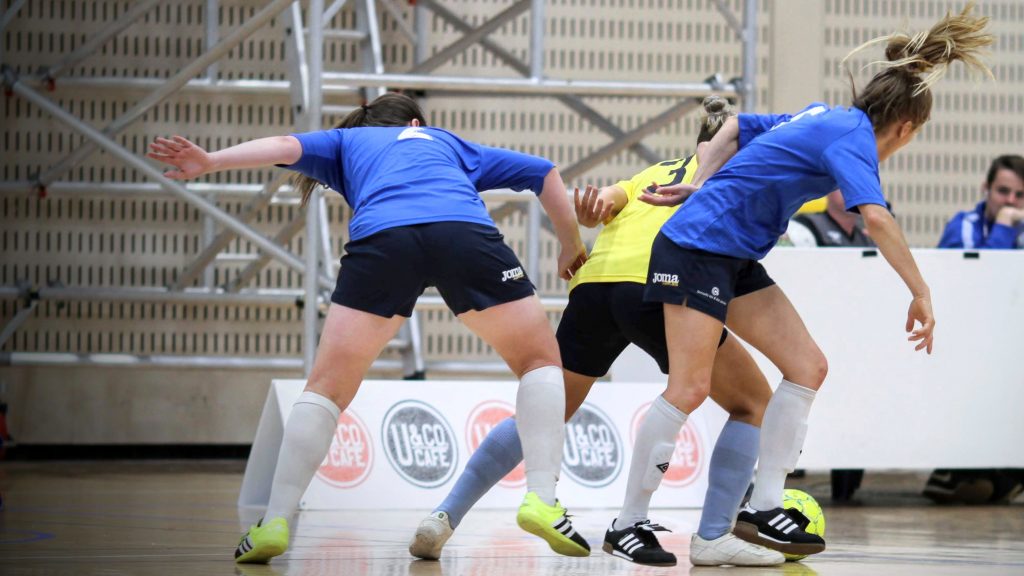 12 BOYS:
Boomerangs 4 – 5 Sydney Futsal (ht 2 – 2)
The 12 boys were only narrowly defeated by this opposition in the first half of the draw and were confident of putting up a good show. They were right in the mix up until halftime and for much of the second half, but the concession of a goal with just a few minutes to play to give the visitors the lead was not what they hoped for, and try as they might, they could not bring it back to par by the final whistle.
Goals to Daniel Kenning (3), Tomer Doron

Boomerangs 1 – 15 Sydney City Eagles (ht 1 – 6)
After such a solid showing on Saturday, the boys were full of confidence going into this Sunday match against the undefeated Eagles. However, the vast difference in quality between the two days’ opponents was clear to see and the soaring Eagles could not be stopped. A disappointing result given the closer outcome less than 24 hours earlier.
Goal to Tomer Doron
Ladder Position: 7th ( – )

13 GIRLS:
Boomerangs 4 – 0 Sydney Futsal (ht 3 – 0)
The 13 girls were in the zone for this match and were keen to improve on the 2-2 draw last time they played. The girls followed instructions, put together some nice pieces of play and importantly defended well. All the ingredients you need for a tidy victory!
Goals to Maia Cameron (2), Izzy Listar, Sofia Palywoda

Boomerangs 7 – 1 Sydney City Eagles (ht 1 – 0)
After their last few outings, the girls are high in confidence and playing as well as they have all season. This Sunday trip to Sydney backing up after Saturday was going to be a challenge, but the girls put together a strong performance to take the match comfortably.
Goals to Reilly Yuen (2), Maia Cameron, Charlotte Cowley, Sofia Palywoda, OG (2)
Ladder Position: 4th ( +1 )

14 BOYS:
Boomerangs 3 – 4 Sydney Futsal (ht 1 – 1)
The 14 boys have been right in the mix the past few weeks and it seems as though their season is finally getting some shape. For the majority of this match, the lads were looking on top, with only the ability to finalise their downfall. It started to come together just before halftime and continued into the second half where they led for most of the clock. However, the visitors surged home strongly, levelling up and them scoring the one that gave them the lead in the final few minutes.
Goals to Tom Barbatano (2), Noah Fior

Boomerangs 5 – 7 Sydney City Eagles (ht 3 – 3)
After dominating for much of the match the day before, and getting no points from the game, the boys were keen to put in a good performance against the Eagles who sat just above them on the competition ladder.  The last time these teams met, saw a solid win to the Eagles – yet another reason to put in a good performance for the boys. They matched it across the first half sharing the spoils with three goals apiece, however, the Eagles were the stronger team coming home and were more effective in front of goal scoring four in the second half (three in a four-minute period) to the visitors two.
Goals to Ethan Yuen (3), Thomas Barbatano, Noah Fior
Ladder Position: 7th ( –1 )

15 GIRLS:
Boomerangs 6 – 2 Sydney Futsal (ht 5 – 0)
On their day these girls are an excellent futsal team. And they showed that quality across the first twenty minutes of this match. Five goals to nil was reflective of the dominance they held on the court. The second half saw them drop off their intensity somewhat, as they preserved their energies for the second leg of the double-header and the coach tried out a few different court combinations.  A solid win.
Goals to Stefi Lejins (2), Sienna Davis, Niamh Larkin, Ayla Robertson, Meg Roden

Boomerangs 4 – 3 Sydney City Eagles (ht 1 – 1)
After the relatively comfortable victory on Saturday, the girls were well set to take on the Eagles in the away leg of the double-header.  The Eagles though brought their A-game to the court and were not going to succumb as easily as Sydney Futsal the day earlier.  With the scores all square at the break, the girls needed to lift in the second period if they wanted to maintain their table-topping position. And that they did taking the match 4-3.
Goals to Teah Hayes (2), Tayla Hampson, Ayla Robertson
Ladder Position: 1st ( – )

16 BOYS:
Boomerangs 4 – 2 Sydney Futsal (ht 1 – 1)
Sydney Futsal was looking to hold on to their fourth spot on the competition ladder with a win in this match. It was all square at the break with honours shared.  A hattrick by Odhran Traynor and a strong defence that stopped the visitors at one goal per half saw the lads take out this important match and cement their place near the top of the table.
Goals to  Odhran Traynor (3), Zane McAlpine

Boomerangs 3 – 5 Sydney City Eagles (ht 2 – 2)
The Eagles had a strong motivation to win this match – they were sitting in sixth position on the ladder and at risk of dropping out of finals contention with a loss after their loss on Saturday to bottom-placed SD Raiders.  Motivation is a strong indcator of performance and they certainly played this match like their season depended on it. An even first half and the teams could not be split, but a stronger second by the home team saw them take the points and continue their hopes for finals futsal.
Goals to Leon Michl, Luca Macor, Cale Brown
Ladder Position: 2nd ( – )

18 WOMEN:
Boomerangs 6 – 0 Sydney Futsal (ht 1 – 0)
The 18 women’s season is ticking along nicely with some terrific performances in recent weeks. Form suggested they wouldn’t be too troubled by either opposition this weekend, and the first match of the double-header certainly played out that way. The visitor’s defences held well in the first half, but with the amount of possession and court position the Boomers 18s had, eventually had to lead to goals, and the flurry of goals at the end made this a comfortable victory.
Goals to Alex McKenzie (2), Ella Brown, Lucy D’Arcy, Caity Listar

Boomerangs 6 – 0 Sydney City Eagles (ht 3 – 0)
After a solid and comfortable victory Saturday, the girls looked strong from the get-go in this match against the Eagles. A focus on their defensive effort paid dividends as they notched up three first-half goals while keeping a clean sheet. The second half saw a repeat of the first and have this team looking good coming into the business end of the season.
Goals to Maddie Perceval (2), Lucy D’Arcy, Maria Pachi, Stella De Marco, Ash Garrity
Ladder Position: 2nd ( +1 )

YOUTH MEN:
Boomerangs 4 – 3 Sydney Futsal (ht 3 – 1)
The Boomerangs youth were keen to atone for their earlier loss to Sydney Futsal at Redfern (1-2), and they started this match with purpose and determination. However, for a team that travelled to the AIS with only one substitute (their reserve ‘keeper who played on court), the Sydney team performed admirably in the second half of this testy encounter to nearly cause a significant upset. The Boomers lads held out though, despite the fiery nature of the match and the frequent intervention of the referees.
Goals to Nic Felizzi, Luca Macor, Leon Michl

Boomerangs 6 – 6 Sydney City Eagles (ht 4 – 1)
After making difficult work of the Saturday match, the youth headed up Highway 31 to take on the tough Eagles youth in a Sunday afternoon clash. The Eagles were sitting in fourth position on the ladder not far behind the Boomers team in second. The first half went to plan for the travellers, but the home team was not about to lie down and put in a mammoth effort in the second period to almost steal the match. A 6-6 draw disappointing for this Boomers side, but certainly better than a loss – which is how it could have ended!
Goals to Jayde James-Ward (2), Parsa Tabatabaei (2), Nic Felizzi, OG
Ladder Position: 2nd ( – )

OPEN WOMEN:
Boomerangs 4 – 1 Sydney Futsal (ht 2 – 1)
The Boomerangs women certainly had to work hard to earn this victory against the bottom-placed Sydney Futsal. They dominated all over the court in most aspects, aside from in the important goals column. Their defence though, is certainly the basis on which they build their wins, and the outstanding record of only conceding 13 goals in the season so far means that opposition teams need to expend a great deal of energy at the offensive end, and often for little or no return. A solid, if not flashy victory, that sees them consolidate at the top of the table.
Goals to Miki Day, Grace Basser-Silk, Rachael Corbett, Ellie Raymond

Boomerangs 6 – 1 Sydney City Eagles (ht 1 – 0)
After a tight – but again defensively strong first 25 minutes, the ladies lifted their rating in the second period. Four goals in the first half of the second period buried any hope the Eagles had of taking this match. Another strong performance by the Boomerangs senior ladies team.
Goals to Stella DeMarco (2), Alex Martens (2), Bronte Pyke, Ash Garrity
Ladder Position: 1st ( – )

OPEN MEN:
Boomerangs 1 – 3 Sydney Futsal (ht 1 – 2)
The men’s team is going through a goal-scoring slump at the moment. They are playing well – sometimes exceptionally well – and they are defending staunchly against all oppositions reflected in having the second best defensive record in the league. However, at critical times they are not converting the opportunities they create and this means they miss the opportunity to gain match advantage.

This game against Sydney Futsal was no different. Many chances were created – but many stopped by the defensive effort of the visitors and the effective shot-stopping of their keeper.
Goal to Cuneyt Cagler

Boomerangs 2 – 4 Sydney City Eagles (ht 0 –2)
After the tough match against Sydney Futsal Saturday evening, the lads drove up to Sydney to take on league leaders Sydney City Eagles on their home court. This was always going to be a challenging match as the Eagles have been in sublime form this season – with a stumble only yesterday as they drew with SD Raiders.

The men were right in the match from the get-go, but conversions by the Eagles – two in the first half and another early in the second, almost put the contest to bed. But a fighting rearguard action by the Boomers, nailed two goals in succession in the 37th and 38th minutes to bring some hope of a win. However, the Eagles replied several minutes later and the travelling Boomers could not breach the goal mouth once more.
Goals to Daniel Giovinazzo, Nic Dahl
Ladder Position: 5th ( -1 )

NEXT WEEK
Next week the club is again at home with a round of matches against a wounded SD Raiders – a club that suffered at the hands of their rivals Raiders Futsal last weekend – at a crucial time of the season.

After the Round 10 and 11 matches, the Boomerangs club has consolidated its advantage at the top of the PL2 Club Championship however the race for promotion to PL1 has become more complex with more challengers arising. The next two weeks will be crucial for the club in that quest.