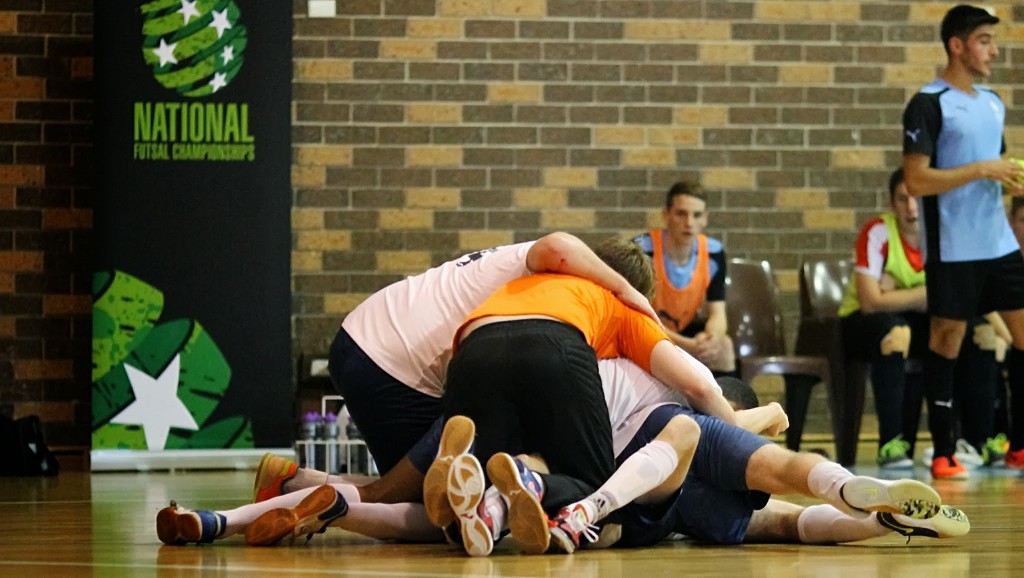 Day 4 of the 2016 FFA Futsal Nationals saw ACT teams compete in a final seven pool matches and in eight quarter and semi finals.

It is at about this time of a Nationals Tournament that the pressure starts to rise and the tough week starts to take its toll. The pressure of finishing in the top four – preferably as high as possible so as not to face off against the strongest team in the semi-final. There is also a growing number of vocal and demonstrative supporters (and coaching staff) at each of the matches. This can be quite daunting to the younger age groups.

As it was, of the thirteen ACT teams participating, seven made quarter or semi-finals. Unfortunately the hurdle of the first final was too high for most of the teams and only one team came through to make it to the Grand Finale at Homebush tomorrow – and that was the experienced Youth Men.

Many others came so very close and tried their hardest, as individuals and as a team, but alas, most stumbled at the first elimination stage of the competition.

The ACT results in summary:

At Dural, the 12 Girls had a ding-dong battle against Queensland in the final pool round, which they narrowly lost, setting up a rematch in the semi. Unfortunately things didn’t quite go the way of the youngest girls teams and they were easily defeated by a pumped and ready Queensland team.

12 Boys White (development squad) had a marvellous experience in playing against the Solomon Islands team in their final pool match – they lost the match, but that didn’t seem to matter that much.

12 Boys Blue drew their final pool match early in the day, but then lost the cross over quarter final to the same Solomon Islands team.

13 Boys won their midday quarter final in a fantastic, close and exciting game against NSW Lightning – a game that saw Zac Barbatano score a goal with less than two minutes remaining to bring up his hat trick and to win the match. Later in the afternoon, they went down to the outstanding Victoria Magic team in their semi final. Magic have had only eight goals scored against them all tournament – and the Boomers 13s scored six of them (across two games).

Over at Penrith, the 14 Boys had their final pool game in which they went down to Queensland Metro.

14 Girls won their final pool match against FFSA, but came unstuck in a thriller against NSW Lightning that went into extra time after being 1-1 at full time. Two red cards and much drama made this an edge-of-the-seat clash that unfortunately did not fall the way of the ACT team.

16 Girls lost their semi final to NSW Thunder by the same scoreline as the final pool match against the same team some 24 hours previous. A disappointing end to the tournament for this squad.

At Valentine Sports Park, the 16 Boys White played exceptionally well to defeat Victoria in their final pool match of the tournament. This win put them above Boomers 16 Boys Blue, but just out of the top four.

16 Boys Blue lost their final pool match to FFSA but played a very strong defensive game, only conceding a few in the final few minutes to make the scoreline flatter the SA team.

Youth Women were very unlucky in their semi final loss to NSW Lightning – a team they defeated (4-3) in the earlier pool rounds. A single goal scored just after half time was the difference (and a consolation goal in the last few seconds). The Youth Women had many chances to equalize in the second period, but failed to convert their opportunities.

Youth Men White had no games today, but many players stayed around to support the other ACT Boomerangs teams.

Youth Men Blue won their semi final with a sensational effort – especially in the second half when Ben Basser-Silk scored a hat-trick and the lads’ outstanding defence meant that no goals could be scored against them in the second period. The boys now face up against last year’s Grand Final foe – NSW Thunder – in tomorrow’s Grand Final at Homebush.

The Capital Football AWD team were disappointingly defeated by Queensland in their semi-final, a re match of a thriller that the ACT boys took the hours not 24 hours previous.