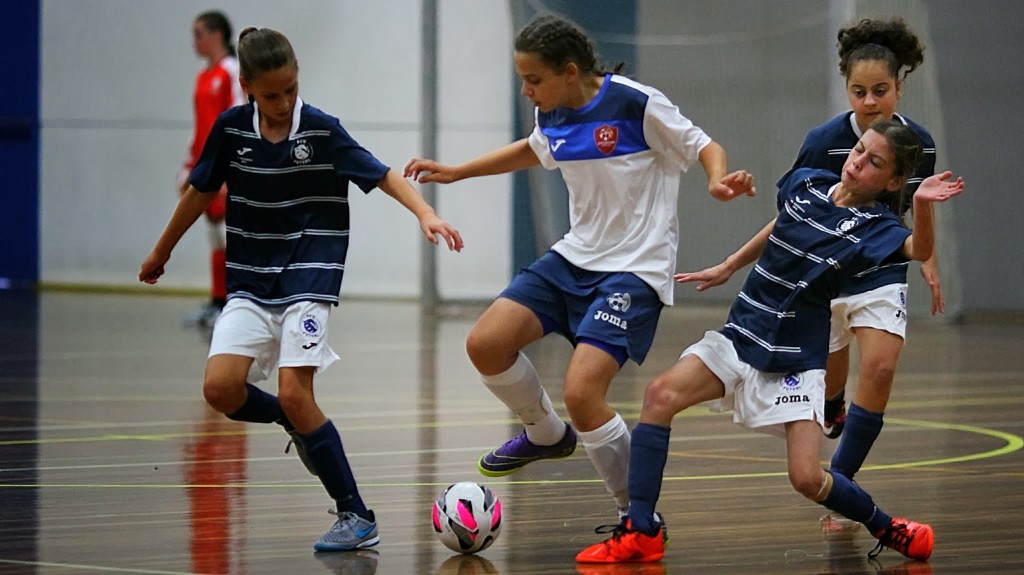 Day 3 of the 2016 FFA Futsal Nationals saw ACT teams compete in a further 24 matches – mainly across two venues, Valentine Sports Park and Penrith Valley Sports Centre. Dural hosted a limited number of matches only due to rain leakages affecting a couple of courts.

It was yet another fabulous day of high quality futsal, demonstrating all the positives of the indoor game, whilst bringing together the competing States and Territories (and guest internationals), in the spirit of competition. The participating players, from as young as nine years of age, through to 19 year olds, have all competed in a positive spirit and represented with pride – they will all go home with great memories of this week.

The ACT Boomerangs results in summary:

The 12 Girls put together two solid wins on a day that really mattered and will likely see them finish second on the ladder regardless of the final pool match tomorrow. Their semi final opponent in the afternoon could be any one of three teams (with NSW Thunder having locked up top spot).

12 Boys White (development squad) had a rather forgettable day suffering two big defeats at the hands of strong opposition. For these youngest participants still learning the game, the experience is still valuable.

12 Boys Blue with a win and a loss on Day 3 have locked in fourth place in Pool B, meaning a cross-over quarter final tomorrow with the top finisher of the other Pool. This will no doubt be a tough match to earn a place in a semi final.

13 Boys are on a roll with their two terrific wins today and have secured a third spot on the table which will see a quarter final tomorrow against NSW Lightning.

14 Boys finished Day 3 with two defeats, but have improved their play greatly since Day 1. They have one chance in the final round tomorrow to register a win for the tournament before they head home.

14 Girls had a poor Day 3 with two losses, leaving them with the possibility of of losing their fourth place and finals spot. They face off with FFSA (currently third) tomorrow in the final pool round. Fifth and sixth place teams take on first and second. but regardless of those outcomes a win for the 14 girls will allow them to finish third and give them momentum going into a semi-final.

16 Girls also struggled on Day 3 with losses to the top two teams (NSW Thunder and FFSA). Regardless, they have finished in fourth, but will need all their ability and skill to come to the fore to defeat Thunder in the semi-final tomorrow.

16 Boys White did their stable-mates the Boomers Blue no favours by defeating them today. The Whites are out of contention for finals but could finish fifth with a win over Victoria tomorrow in the final pool round.

16 Boys Blue with two losses on Day 3, including to Boomers White, have made qualification for finals more problematic. They can finish steal fourth spot from FFSA should they defeat them in tomorrow morning’s final pool match. That match should be a cracker.

Youth Women with their loss today have fallen into second spot behind today’s victor, NSW Thunder. The Youth Women will take on NSW Lightning in the semi-final showdown tomorrow.

Youth Men White with a loss in the earlier match to the Boomers Blue, atoned themselves in a late evening game at Valentine Park with a stunning come from behind win over South Australia. Down 3-0 at the eight minute mark of the second half, they overran their opposition scoring four tremendous goals in the final twelve minutes. A stunning match and a great way to end the tournament for these terrific lads.

Youth Men Blue had a reasonably comfortable victory over their Boomers White counterparts at midday before having a bye in the final afternoon round. By virtue of the White team defeating FFSA in the final pool match, the Blue team has finished the regular rounds in third spot and will take on NSW Lightning in tomorrow’s semi-final.

The Capital Football AWD team had yet another terrific day with two fantastic wins – especially the excitement filled match versus Queensland, last year’s Champions. The Canberra lads have a bye tomorrow, and will finish either second or third on the ladder with a semi final appearance likely against Queensland once again.