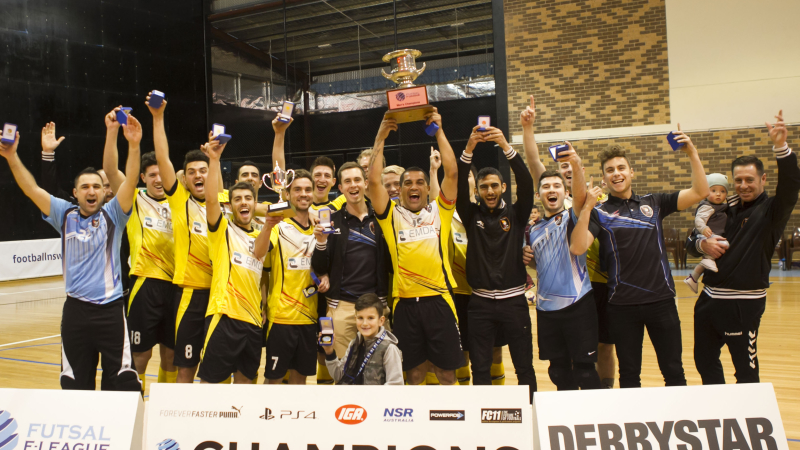 East Coast Heat came from a goal down to defeat Dural Warriors 3-2 in a classic 2015 Mens F-League final at Valentine Sports Park on Sunday afternoon.

Dural got a dream start through Brendan Hoyer’s sizzling strike but East Coast returned fire with Chris Zeballos, Clayton Musumeci and Grant Lynch all finding the backing of the net before Greg Giovenali’s late strike made the last five minutes riveting, Heat hanging on for a brilliant 3-2 win.

It was feelers early on as both sides probed and a delicious Greg Giovenali ball up-court freed up Dural team-mate Chris Polkinghorne at the top of the D but he couldn’t guide it past an advancing Peter Spathis in goal for East Coast; Hoyer could however after he superbly latched onto a Glen Kelshaw cross to hand Warriors a 1-0 fifth-minute lead.

Heat’s Shervin Adeli tried one from range and Warriors glovesman Nicholas Starr did well to kick clear Matt Mazevski’s low drive as East Coast sought to give the Dural defence no respite, including Lynch smashing a well-worked corner against the crossbar and Heat were getting closer.

And it was finally back to evens when Adeli laid a perfect ball onto a sprinting Zeballos who made no mistake from 3m out to level the scores at 1-1 six minutes before the break.

Lachlan Wright, Jordan Guerreiro and Lynch all went close to putting Heat in front, Lynch’s dance along the goal-line just touched clear by a scrambling Starr who then booted away Daniel Fulton’s grasscutter as East Coast closed out the half full of steam.

Dural started the second-term full of fire but it was East Coast who went closest to scoring as Fulton’s shot from just outside the D forced Starr into a reflex stop with his leg and Zeballos was a fringe short of nodding in a deft Adeli cross seconds later.

Starr was keeping Warriors in it with an acrobatic double-save to deny Guerreiro on the burst through the middle but he couldn’t stop Musumeci from gobbling up a terrific close-range chance following a neat Zeballos pass inside the D and Heat led 2-1.

And suddenly it was 3-1 when Zeballos lobbed beautifully for Lynch to rise highest and head home from a couple metres out, twice champions Dural in real trouble trailing by two goals with nine minutes left on the clock, and young gun Wade Giovenali hobbling with an ankle injury he picked up during Saturday’s semi-final win over Inner West.

But the Warriors responded in typical fashion, some sideline magic from Bruno Pivato and then somehow chipping from the baseline to an open Greg Giovenali near the halfway line and the Futsal weapon drilled it into the top corner of the net to halve the deficit to 3-2 five minutes from fulltime.

A packed Valentine Sports Park then erupted when Lynch tangled with Greg Giovenali midcourt, both players handed a yellow card as the tension mounted, and Spathis, who’d been cool all game lived dangerously as he also picked up a caution (he had to sit out last year’s ending with two yellow cards), but beside some frantic final exchanges East Coast held firm to relish their finest F-League moment – a 3-2 championship victory.

So many players stood out in both trenches but man-mountain Lynch had a huge say on East Coast’s fortunes this weekend and is picking up a big-game reputation – two goals against Vic Vipers in Saturday’s semi-final, a decisive strike in today’s F-League title bout (20 goals for the season.

The delighted Heat target took it all in his stride. “I’m just pleased to be playing alongside so many outstanding players that all I have to do is worry about playing my best and nothing else,” Lynch said. “I’ve been welcomed into a great environment at East Coast and [this campaign has] been a real pleasure.”

“Dural are always tough to reel in, but we back our ability to come back in these situations and thankfully we took our chances today.”

Heat coach Simon Keith tried nothing different in his approach to the grand final rematch and just backed his players to finish the job they started last year. “The guys I’ve got have all the belief they can play and today they finished off their opportunities,” he said.

“You have to do this every time you play Dural as they are a very composed side. Last year they were better than us and deserved their win; this year it was no different for us and this time it fell our way.”

Warriors coach Rob Varela dipped his hat to a very good contest. “They were just that little bit sharper, hungrier, and maybe last year’s loss drove them on,” he said.

“We just didn’t have enough composure at the right times, which is usually a trademark of our game; but well done to Heat, it could’ve gone either way but they put their chances away and we didn’t.”