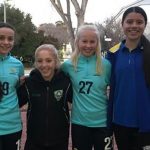 Boomerangs FS congratulates all six Canberra girls that trialled for the Junior Matildas Squad over the past few weeks.

We congratulate Josephine Dubbert and Emma Ilijoski for making the final cut and for Stefi Lejins on becoming a shadow player for the upcoming tournament. An amazing opportunity awaits.

Of the six players to trial from the ACT – the three mentioned plus Elke Aitolu, Isabella Barac and Alexia Forner – five of them; Emma, Stefi, Elke, Josephine and Alexia have been involved with the Boomerangs futsal program over recent years. 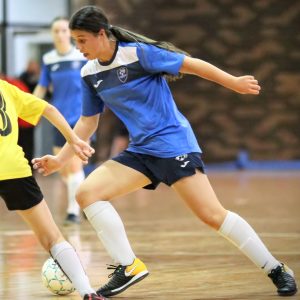 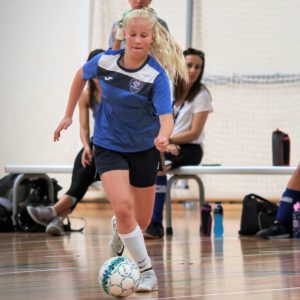 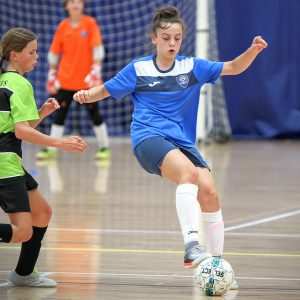 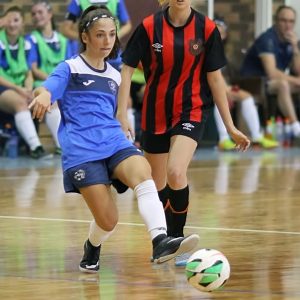 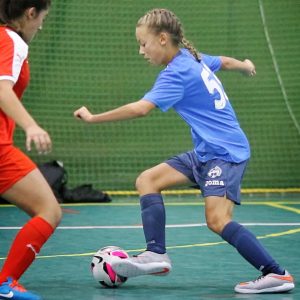 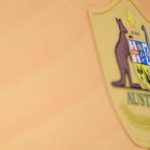 Australia’s Under 17 Women’s National Team Head Coach Ante Juric has named a 23-player squad that will compete in the AFC U-16 Women’s Championship Qualifiers in Vietnam from August 25 to 3 September 2016.

Australia is in Group D along with Uzbekistan, Vietnam, Hong Kong, Palestine and Iraq and opens its campaign against Palestine on 25 August.

All matches will be played at the Vietnam Youth Training Centre in Hanoi.

The AFC U16 Championship Qualifiers signify the start of the elite women’s football pathway and the first steps for young female football players who aspire to play for the Westfield Matildas.

The AFC U16 Championship Qualifiers serve as the qualifiers for AFC U16 Women’s Championship, which will be played in China in September 2017.

The top three nations from the AFC Championships will progress to the 2018 FIFA U17 World Cup, which will be played in Uruguay. 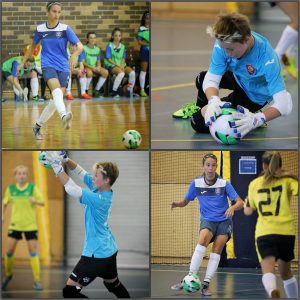 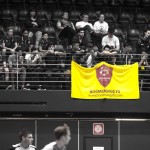 [For photos of the week’s matches, please visit the Boomerangs photo site and the FNSW Official Facebook page.]

Yet another massive effort by the Boomerangs club, working in conjunction with the ACT football federation, Capital Football, to assemble 12 teams to participate the annual FFA Futsal Nationals in Sydney from January 4-8, 2016. In addition, Capital Football sent its representative AWD team (athletes with a disability) to compete in the eight team AWD division, which was well supported by the travelling ACT contingent. END_OF_DOCUMENT_TOKEN_TO_BE_REPLACED 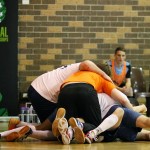 Day 4 of the 2016 FFA Futsal Nationals saw ACT teams compete in a final seven pool matches and in eight quarter and semi finals.

It is at about this time of a Nationals Tournament that the pressure starts to rise and the tough week starts to take its toll. The pressure of finishing in the top four – preferably as high as possible so as not to face off against the strongest team in the semi-final. There is also a growing number of vocal and demonstrative supporters (and coaching staff) at each of the matches. This can be quite daunting to the younger age groups. END_OF_DOCUMENT_TOKEN_TO_BE_REPLACED 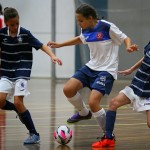 Day 3 of the 2016 FFA Futsal Nationals saw ACT teams compete in a further 24 matches – mainly across two venues, Valentine Sports Park and Penrith Valley Sports Centre. Dural hosted a limited number of matches only due to rain leakages affecting a couple of courts.

It was yet another fabulous day of high quality futsal, demonstrating all the positives of the indoor game, whilst bringing together the competing States and Territories (and guest internationals), in the spirit of competition. The participating players, from as young as nine years of age, through to 19 year olds, have all competed in a positive spirit and represented with pride – they will all go home with great memories of this week. 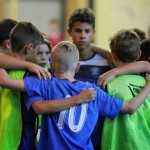 Day 2 of the 2016 FFA Futsal Nationals saw ACT teams compete in a further 21 matches on a Sydney day that pelted down with heavy rain to match the deluge of goals across the many National Futsal Championship matches played. The rain was so heavy that several matches had to be rescheduled to other venues later in the day and well into the evening.

For the competing ACT teams, this was a much improved second day as the players settled into the tournament and started enjoying their games – along with this came more positive results. 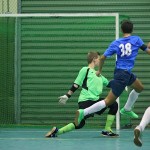 Day 1 of the 2016 FFA Futsal Nationals saw the ACT teams compete in 19 matches across ten age groups (incl AWD) and saw probably fewer victories than had been anticipated and a few shock losses for strong ACT teams expected to do well this Championship. In summary:

The 12 Girls had a win and a loss from their two matches, with Emma Ilijoski shining in front of goals in game one.

12 Boys White (development squad) were on the wrong end of a couple of big scorelines, but showed a lot of promise and heart, and potential (including a second Ilijoski registering multiple goals on the score sheet). 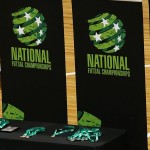 After a solid showing at the 2015 FFA National Futsal Championships, the Boomerangs club is working with Capital Football to send twelve teams to the 2016 edition in Sydney from January 4-8.

The Championships are being held across four venues in Sydney with pool matches being played at Valentine Park (Football NSW headquarters and Sydney’s premier futsal centre), Dural Sport and Leisure Centre and at Penrith Valley Regional Sports Centre.  Friday 8 January will see the finals played at Sydney Olympic Park.

In addition to representation from all Australian mainland states, the Solomon Islands will also have boys teams represented in the U12 and U14 age groups. This will provide an opportunity for ACT futsal players to not only take on the best teams in the country, but to also test themselves against a formidable international opposition. END_OF_DOCUMENT_TOKEN_TO_BE_REPLACED 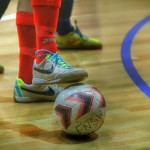 The draw for the 2015 F-League Season has been released by Football NSW.

The competition for 2015 consists of nine men’s teams and seven women’s team.

Boomerangs FS men and women will play all their home games at mPowerdome (eight for the men and six for the women), and away games will be held in various locations in Sydney, Melbourne and Brisbane.

The majority of the games are scheduled for Saturdays to minimize conflicts with outdoor/football (NPL) matches. There will be two Friday night ‘local derbies’ against the Capital FC teams and two games on Sundays mornings against visiting teams.

The men’s season kicks off with a home game against F-League debutants Bayside Pirates on Sunday morning 10 May (11am) and the women kick off a fortnight later on Saturday 23 May when South Brisbane bring their men’s and women’s team to mPowerdome.

The season has scheduled several weekend away trips for the Boomerangs to Sydney for matches against East Coast Heat, Dural Warriors and Inner West Magic, and two major away trips – to Melbourne to take on Bayside Pirates and Vic Vipers in June – and to Brisbane (Galaxy FC and South Brisbane) in early July.

The final weekend of the regular season – before finals – will see the second ACT derby on the Friday night (17 July) followed by a home game against Vic Vipers (18 July).

Semi-Finals and the Grand Finals will be held in Sydney the following weekend (25/26 July) at Valentine Park.

Follow Sporting Pulse during the season to keep up to date with the schedule, results and the ladder.

The full men’s draw can be found HERE, and the women’s draw HERE. 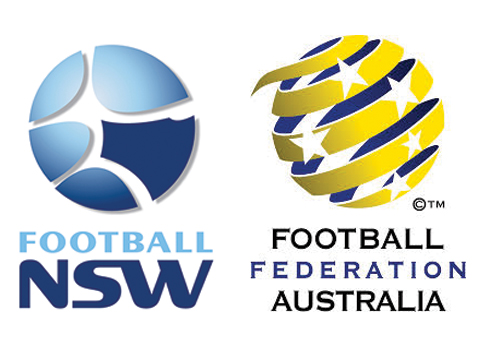 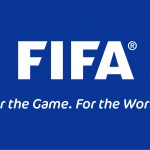 The following from FIFA.

There can be no denying that futsal has enjoyed continuous and remarkable growth over the past decade. Solid proof of that trend comes in the form of increased numbers both of registered players and leagues now run under FIFA rules – factors that have had a direct impact on improved standards in both domestic and international competitions.

Further evidence of this leap in standards was on display at the last FIFA Futsal World Cup, arguably the most evenly matched edition to date, as well as the quantity of emerging nations making a splash in the discipline. In its quest to continue the sport’s evolution in the most organised way possible, the FIFA Executive Committee, at its meeting of 18 and 19 December 2014 in Marrakech, approved something that world football’s governing body has long sought: the first ever futsal international match calendar, which covers the period of 2016-2020.

“It’s like this, the global growth of futsal means that a unified calendar has become indispensable,” said Jaime Yarza, Event Manager for the FIFA Futsal World Cup, when speaking to FIFA.com. “Everyone involved in the sport – FIFA, the confederations, associations, leagues, clubs, players, sponsors, media – needs to be able to plan for the sporting season in advance. And being able to do that for the next two or three years is better than for just one.

Javier Lozano, who twice coached Spain to FIFA Futsal World Cup glory and is currently the President of theLiga Española de Fútbol Sala, backed up Yarza’s views. “This calendar is a big help for our clubs and for futsal across the globe: finally we can make concrete plans,” he told FIFA.com. “Safeguarding clubs, players and international competitions is essential for taking this sport to the very highest level.”

Releasing players
The new calendar, whose opening cycle will include the next two FIFA Futsal World Cups, is based around players’ mandatory release to their national teams, depending on the various stages of international competition. “We’ve tried to take into account the interests of all parties. First of all, we’ve set aside 12-day windows for the final stages of the confederations’ senior national-team championships. Now confederations will be able to properly prepare both their competitions and specific sponsorship programs. It even makes choosing host nations easier,” added Yarza, in reference to events such as the UEFA Futsal EURO and the Copa America de Futsal.

In addition to the final stages of confederations’ championships and the FIFA Futsal World Cup, the calendar also includes two international windows, called Type I and Type II. “The first type lasts for ten days, during which national teams can play up to four friendly matches, but which can also be used to carry out fund-raising events or extended periods of preparation, for example for the World Cup,” explained Yarza. “The second type is for four days and allows no more than two matches. Again, it will be up to the associations to decide how they make use of the time.

“It’s taken a huge amount of work in terms of coordination, since it has required bringing together the interests of many parties,” admitted Yarza. “We’d like to thank everybody, the confederations, associations, leagues, clubs and players, for their understanding. We’ve tried to take into account the needs of all of the world’s regions.”

Though satisfied with the step taken, Yarza signed off by emphasising that the calendar remains a work in progress: “We’re pleased to say that this [calendar] has put the defence of the sport and its stars – the players – first. In any case, in the knowledge that nothing is perfect, in 2017 we will speak to all parties again to discuss if any changes are required.”